Æthelstan’s invasion of Alba in 934 fell short of the desired objective to bring Constantine II to heel. Events would redirect Aethelstan northward as the throne of Jorvik (York) became vacant. With no direct heir, Olaf Guthfrithson, King of the Dublin Norse laid claim to the throne and to ensure his claim, Olaf gained support from Constantine II of Alba and Owain I of Strathclyde. Sailing from Dublin, Olaf would meet Constantine II and Owain I on the march south.

Described by chroniclers and poets as the ‘great battle’, Brunanburh lasted the better part of a day leaving thousands of dead on the field. To simulate this, the single command is doubled in size bringing the total of elements to twenty-four. How this variant works can be found by following the link.

Aethelstan set off from Winchester with core units filling the ranks on his march through Mercia. Most likely, this would include the greater fyrd and two 7Hd must be included in the Saxon army.

Posing a different problem, no strengths are known of the Norse, Scots and Strathclyde forming the coalition. Therefore, two lists are proposed with either Olaf supplying the greater force (12 elements) or Constantine II. To bolster their ranks, any mounted selected will deploy as their equivalent dismounted type, this would have spearmen for Strathclyde and Constantine II fighting on foot with his thegns.

Aethelstan, III/25b (must include Mercian levy of 2 x 7Hd)

Where the battle took place remains unsolved as there are four locations named as likely candidates. The Wirral Peninsula offers an ideal landing for the Dublin Norse longships and for this test, terrain pieces were limited to gentle hills, scrub, and wood.

The Battleof Brunanburh, University of Nottingham (the podcasts are particularly interesting).

Both armies deployed in extended line covering the breadth of their deployment area, leaving extra elements to be positioned in a second line. The battle commenced with the Norse Vikings striking the Mercian division, suffering casualties for their effort. 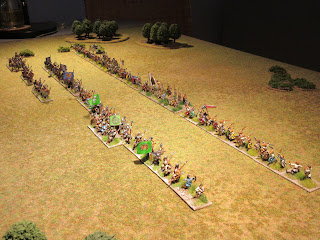 Capitalising on an early success, Wessex struck the Scots and Strathclyde. Strathclyde proved tenacious not yielding ground, the Scots however, managed to pierce the Saxon line creating chaos among the Saxons. 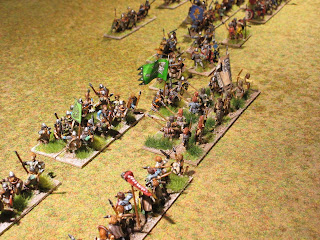 The carnage among the Saxons escalated forcing them to leave the field; presenting the coalition a victory, 8-3. This time, the Saxon thegns (4Bd) were positioned together to hopefully improve their chances for a breakthrough. 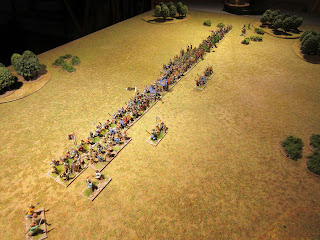 Battle swayed to-and-fro, with casualties relatively even on both sides. 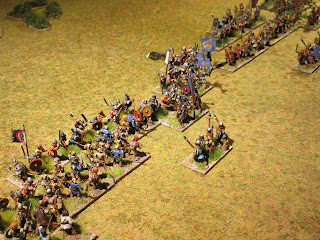 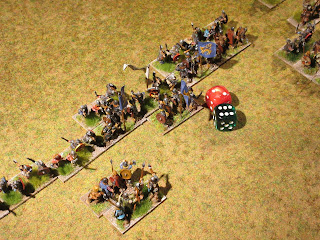 Despite their small numbers, the Scots again pierced the Saxon line and avenging their fallen warlord, the Norse put to flight their opposition to deliver a second victory; 8-4 + general. 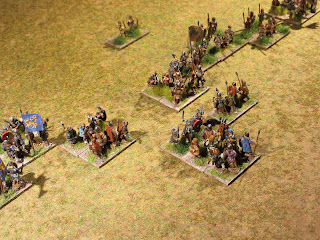 List coalition one was used for both tests resulting in two defeats for the Saxon army. Of the two, the second came closest to matching actual events. Olaf’s demise would prompt the Norse to leave Britain ceasing any claim to the throne of Jorvik, therefore a strategic victory for Aethelstan.

Testing will continue next month and use the second list for the coalition.