I just took a number of photos of the knights before varnishing. In the foreground you can see a simple chart I used to paint the decorative lances. The same colour combination I used to paint leather parts, such as saddles, scabbards, and harnesses. The chart served as a guide line as some did not look well with certain horse colours. 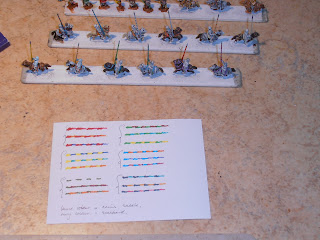 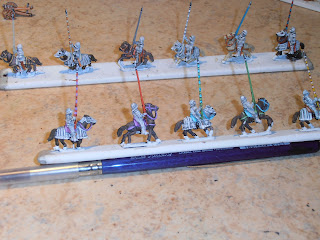 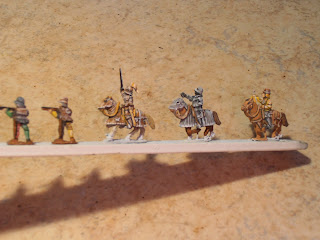 This command served well to test out some theories with regard to painting plate armour. The last command will certainly profit from all this experience and will take less time to paint.

After the Austrians, I have Hungarians and Wallachians to paint, these too are from Legio Heroica.

Posted by Timurilank at 02:20 No comments:

These past four days we have experienced some opressive heat, by Dutch standards, so painting the medieval Austrians has proved sporadic. My production style has been reduced to working on one plinth of figures a day. Still, the results are an accumulation of many tiny steps.

I chose yellow as a theme colour. This is less appearent as darker secondary colours can still dominate the figure. I chose reds and green for this. Some helmets are also painted which will help unify this command. 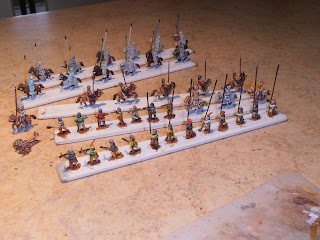 All that remain to paint are 12 knights, have of which ride armoured horse. These six will have decorative lances, no spirals but strips. It is still too hot.

Actually the heat has proved a blessing. Working with smaller number of figures during a session has promted me to look for a way to mix and/or thin colours quickly without it drying prematurely. A plastic lid served doubled a pallet. I cannot believe all these 50 plus years I have done without one.

The finishing touches to the Late Swiss are done, highlighting and white crosses, so now the figures are ready for varnishing. The crosses, which are not easily seen in the photo are positioned on an upper leg, shoulder or on the back of the figure. In some cases I painted a slightly larger cross with dark grey which gave the white cross better definition. Double work, but the effect is improved greatly. 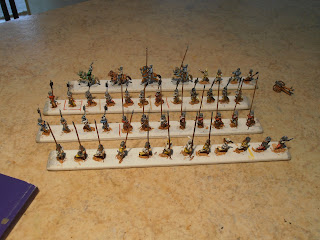 Flags should be easy to paint, a black bull on yellow background for Uri and a small white cross on a red field for Schwyz. I am currently drawing the flags for the Bavarians and Austrians so I will add the Swiss flags to the sheet already started. I will add small pennons for some halberd and the artillery element as well.

Later this  week, I will clean and undercoat the remaining two commands of Austrians; 40 cavalry and the remaining pike, crossbow, Handgunners and artillery.

Cheers,
Posted by Timurilank at 00:51 No comments: 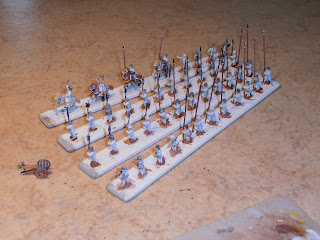 Next step is to add clothing colour.
Cheers,
Posted by Timurilank at 22:36 No comments: 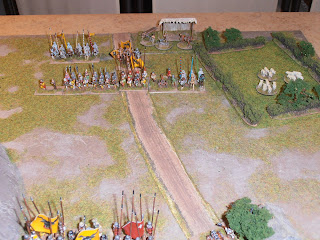 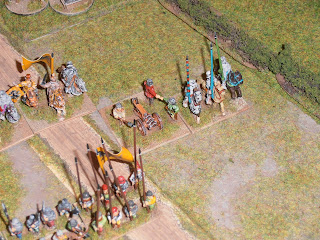 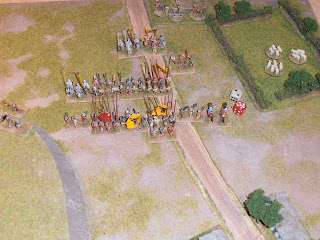 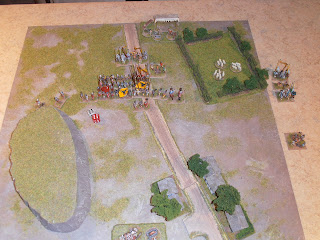 Certainly something to think about.
Cheers,
Posted by Timurilank at 12:24 No comments:

All that I lack are the shield patterns and the Saxons will be ready for varnishing. Sketches for the shields were already done, so there will be no extra time needed. By tomorrow evening these should be completed and then will come the Danes. 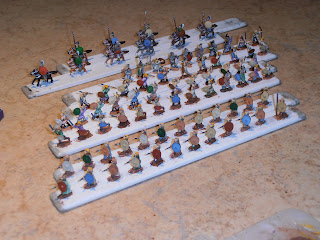 My only experience with Metal Magic figures were Lithuanian cavalry. These were quite animated which left plenty of room for detail. The foot figures with cloak gave very little spacing between arm, shield and weapon. In contrast, the Alain Toulier figures had expressive poses which produced ample area to paint. Both sets of figures are true 15’s.


When these two commission projects are done, then I will return to the late medieval period and paint the opponents for my Bavarians, the Imperial Austrians.


Cheers,
Posted by Timurilank at 05:29 No comments: