Rome against the Marcomanni

The latest project Portugal 1809 has placed all my ancient activity temporarily on hold and after a suspension of nearly two months one begins to feel ‘stale’.  As my regular DBA sparring partner was away I managed a solo game between Rome (Middle Imperial) against the Marcomanni.

To make this an interesting exercise, I decided to increase each command from 12 to 18 elements with the loss of one third ending the game. Keep in mind, by adding the extra elements this would place a strain on ‘pip’ usage and lengthen the game somewhat.

The Marcomanni were defending their forest region and a series of fortuitous die casts covered each quadrant with a terrain piece; three woods and one hamlet. The woods offered the Marcomanni coverage for both flanks, but hampered the deployment of their cavalry and these were placed in a second line behind the centre.

Anticipating a wild rush forward, the Romans formed two groups in echelon formation with a third group held back as a reserve. The bulk of the cavalry were placed on the right flank, beyond the wood, with an objective to encircle the barbarian horde and strike their rear. 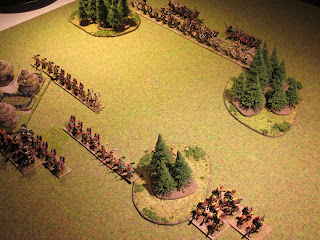 The opening moves.
Fortuna was in a frivolous mood this night and held the barbarian pip scores low, but did Rome no great favour by giving them 'just a bit more' to play with. This forced the Marcomanni to concentrate their efforts on developing a flank assault on their right while the main body ‘shuffled’ forward.

The Marcomanni did inflict a casualty on the Roman left and this had the effect of drawing the attention of the left group away from the central attack. 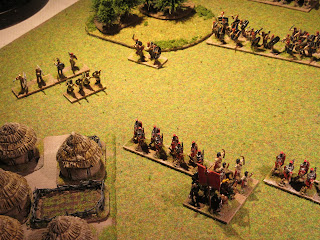 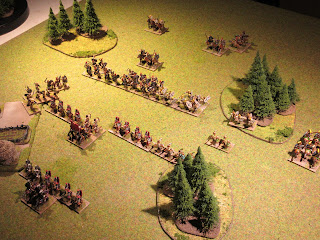 Middle game
Containing the Roman left wing opened an opportunity for the Marcomanni to breach a gap between the two groups. The effect was immediate as Roman losses were severe enough to call up the reserve group. Up to this point, the Marcomanni had incurred no losses against Rome’s two. 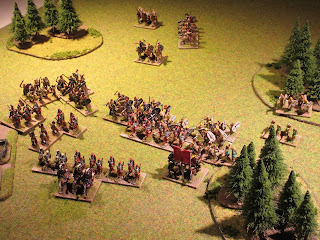 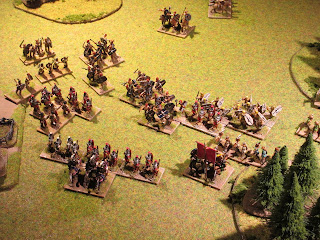 Events took a serious turn as the entire reserve formation consisting of a unit of Praetorians and two of the 1st Parthia fell to the Marcomanni fury. The loss of a single Marcomanni warband was small compensation for the horrendous loss and the fast approach of break point (5 – 1). 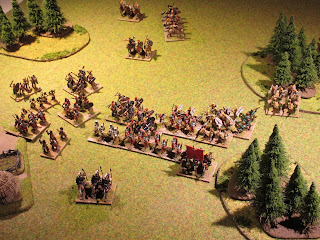 End game
Fortuna finally grinned and blessed Rome with a series of high pip scores unleashing some remarkable Roman wizardry. The last of the reserve, the Praetorian cavalry were thrown in and the general led his own guard onto the dense barbarian columns and together with the legionnaires and auxilia redoubling their efforts brought the score even, 5 – 5. 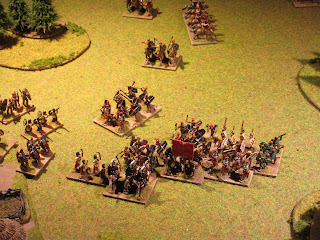 Fickle as ever, Fortuna made a quick exit to leave Rome with a ‘1’ as their next pip score. Rather than force a new combat that bound, the Roman commander regrouped his own guard alongside the Praetorians. The Marcomanni did no better on their own bound leaving Rome to deliver the needed blow to end the game, 5 – 6 for Rome. 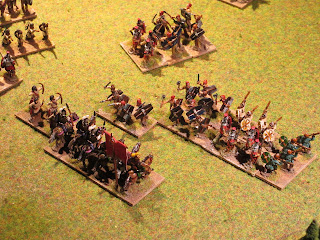 Some thoughts
The battle was played on an 80cm x 80cm board and took less than an hour and ten turns to complete. Despite the increased number of elements, there was ample room for troops to move about. Pip scores were average or slightly less which forced both Marcomanni and Rome to not overplay their game. The Marcomanni did well to focus on one flank before assaulting the Roman centre, this approach nearly won them the battle.

After launching the Roman cavalry wing I immediately had second thoughts if this was a wise move. It did however occupy the Marcomanni cavalry so they did not participate in the main battle which may have been a blessing.