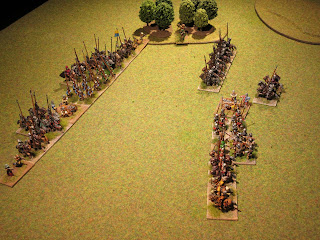 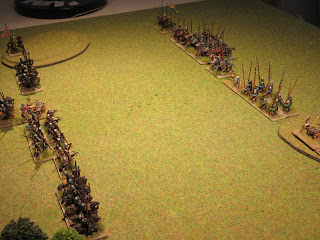 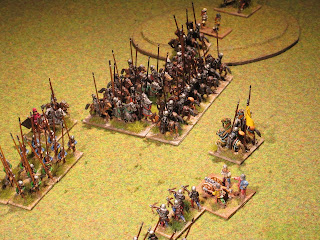 Further testing will continue with Poland, Lithuania, Muscovy, Livonia in the east and Portugal and Spain in the west. Certainly after another week of test I should have a better idea of which armies I should focus on and paint up flags.
Posted by Timurilank at 00:40 2 comments:

Back in 2012 I began actively collecting a number of high medieval or renaissance armies and those postings can be found by clicking on the Index scrolling down to the year 1400. Unfortunately, DBA 2.0 and 2.2 did not work well leading to a collapse in interest for the period. The collection was subsequently sold as many other ancient armies.

Playtesting DBA 3 three years later did rekindle my interest for the ancient period, but less so for the later medieval era. Introduced to the Witcher series of books, that opinion changed as I could visualise doing the campaigns between Nilfgaard and the Northern Kingdoms. Pursuing the idea further I bought figures for the period, developed a set of campaign rules, designed maps and playtested. Unfortunately club members had not a clue what the Witcher was about, so the project was shelved.

Two examples, Redania
Having completed the refurbishment of the Arab armies and further the conversion of the Colonial Sudanese more Muslim armies I began looking at other possible projects within the collection.
It was during this time I had viewed a 10-part presentation of the Italian Wars on the internet. This was interesting as all the participants in the war I could assemble from the dormant collection. Looking at the clothing colours, all were generic and could pass for any Western European army. Excluding the elves and dwarves I had 155 elements to play with, but now a decision had to be made, which armies?
Next post, the solution.

The Tuareg are the latest addition to the collection of Muslim armies and like the others this also of double size (24 elements). Camelry and infantry are conversions from the collection of Colonial Sudanese and the ansar provide the majority of figures with a small number of Fuzzy to represent Iklan skirmishers (negro serfs).

The DBA 3.0 army list for the Tuareg (III/70) has been revised such that a larger number of mountain tribesmen (3Wb) can be fielded in larger numbers as an option to an all mounted force.  This worked well as I could stretch the number of camel mounted figures to build two commands.

In addition to the usual filing and repositioning of weapons all the figures required veils. These were made with Milliput as were the saddle cloths and tassels for the noble lancers. Two such elements were done for the Almoravid and are pictured below. Photo one displays the effort so far and the next step is to fix the figures to plinths. 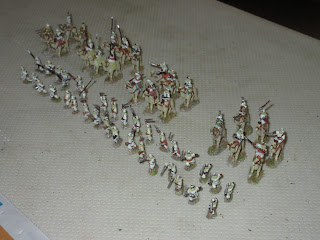 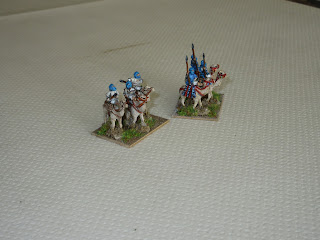 At the time of writing, all the figures are painted, but shields are needed for all the infantry figures and these will be made with Milliput. Check the link to view examples of Tuareg shields.

A few test shields were made laying each shield flat to be shaped and scored on non-stick paper. I will need about 30 shields. 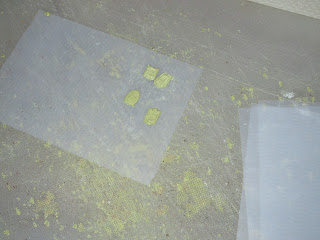 The shields took longer than expected as many needed trimming to reduce their size. These were given to the hill tribesmen that fought with the Tuareg and both commands consist of an equal number of camel mounted and tribesmen. The additional elements represent the slave troops that fought along side the camel warriors. 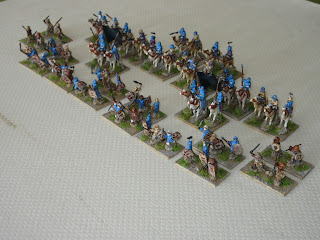 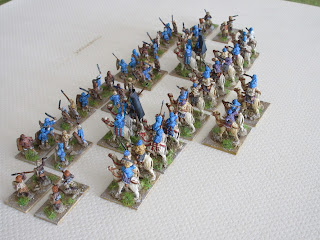