Charles Martel subdued a revolt, led by Raganfrid, the late mayor of Chilperic II and upon its conclusion, Charles resumed his campaign in Bavaria. Passing through Swabia Charles gathers fresh troops to join in the campaign.

It was during this time news reached Charles of a Saracen raid in central eastern Frankia. Unable to send assistance, Charles hoped the indomitable Bishop Emilien of Nantes with local forces would be sufficient to beat back the Saracen.

The Saracens are led by General Ibn Suhayam Al-Kalbiare. Its exact composition is unknown however, the chroniclers describe the raid as being “rapid”. The Andalusian III/34a list serves well for the force operating from Provence but with one proviso; Berber and Arab elements are of equal number. In addition, demonstrating the less than amiable relationship between the two, neither can form groups with one another and remain segregated throughout the battle.

The raid takes place through Burgundian lands, no longer an independent entity, therefore use the Carolingian III/28 list with the following adjustments;

Battle takes place on the left bank of the L’ Arroux River near Autun, Burgundy. Two woods, a hamlet (BUA) with a road parallel to the River L’ Arroux are to be positioned by the defender.

Reviewing the photos of both test games. the spot between the woods, would offer a greater advantage for the defending Franks. As events transpired, the Franks achieved an unhistorical result of winning both tests. 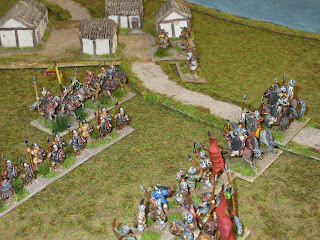 Both sides deployed in a conventional manner, placing their infantry spear in centre flanked by light troops and cavalry. The Franks gained a slight advantage in the initial clash and won the battle killing the Saracen leader. 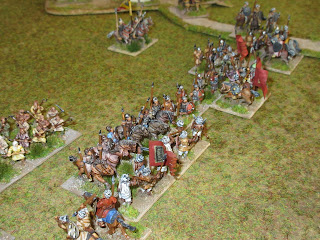 Test number two, The Saracen improved their deployment placing light troops in the woods with the bulk of the army further back. 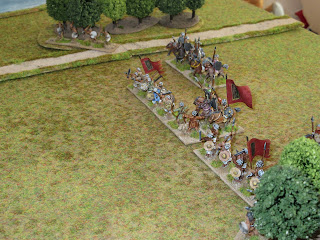 In response, the Franks placed the lesser levy to face the Berber troops leaving the Frankish infantry to amass their number against the Arab wing. 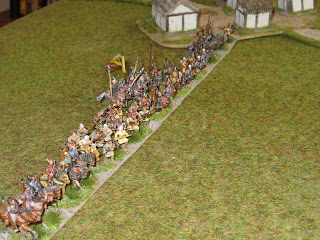 Both sides attempted to encircle their opponent’s left flank; the Saracen launched their attack early and spend the remainder of the battle as spectators. Meanwhile, the Franks having a longer distance to cover did appear to see the battle’s end. 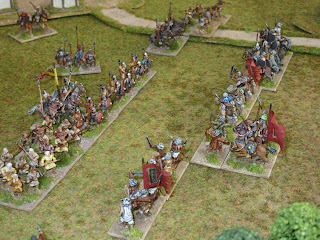 The collapse of the lesser levy on the right did cause concern as it exposed the centre right. Fortune smiled on the Bishop, when the arrival of the Frankish cavalry struck the Saracen rear. 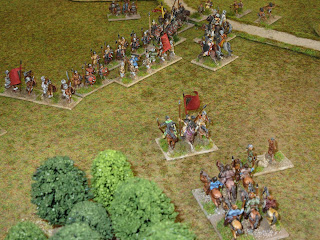 Dangerously close to being pinned against his own troops, the Saracen commander called for a general retreat with the loss of the Jund cavalry.

Bishop Emilien did lose the battle of Autun leaving the city to be sacked by the Saracen. Years later, Charles would expel the Saracen from Provence, but would require the support of the Italian Lombard to achieve this.

As mentioned earlier, switching deployment positions might help to bring about a Saracen victory.

Posted by Timurilank at 00:33 No comments:

Charles Martel’s victory at Soissons (718) concluded the civil war with Chilperic II, Raganfrid and Odo of Aquitaine. As undisputed Dux Francorum, his first objective was to subdue Frisian resistance and news of Radbod I death hastened Charles to deploy his forces against the new Frisian king, Bodda. Near Lake Flevo, the Franks met the Frisians prepared for battle.

The Frisians deployed their line between a wood and a village. With both Frisian flanks protected, Charles amassed his cavalry on the left, spearmen in centre and skirmishers on the right. The spear would pin the Frisian wall while Frankish light troops infiltrate the wood and attack the enemy left. 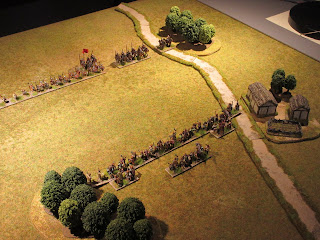 Wary of Frankish cavalry, the Frisians were eager for battle and holding his right back, Bodda advanced his centre against the Frankish spear. 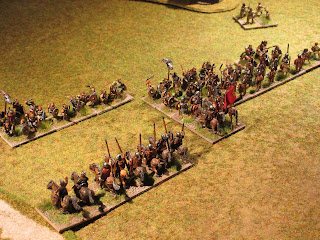 The Frankish shieldwall held allowing the Frankish light troops to attack the exposed flanks of the enemy. The battle was brief and decisive as the Frisian right flank succumbed to the Frankish cavalry.

With no other option, Bodda concluded a truce with the Franks.

Posted by Timurilank at 02:36 No comments: