Filling in the ranks.

During the past several years I have sold nearly 80 DBA and HOTT armies. With requests for extra elements or changes, I have a number of DBA armies to sell, but are under strength. I do not like to sell partial collections, so I have made a number of small purchases to fill out four Barbarian armies. These should be ready by next week including the Later Crusader army of 15 elements. 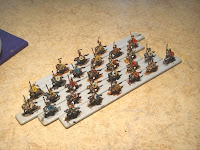 The downside of filling in these collections, my painting skills style have changed and consequently, the original elements will need to be enhanced. 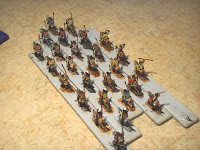 The photos show the last stages for my Barbarian cavalry. Next step, dry-brushing the armour, leather equipment for both rider and horse and a few designs for a number of shields.

The remainder are foot and archers, which will need some detailing and rebasing.
Cheers,
Posted by Timurilank at 07:56 No comments:

My brushes have not been idle for the past few weeks and I would like to show how the Later Crusaders have turned out. 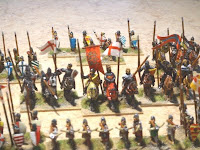 The weather has been very warm these past few weeks, so I decided to add a bit more water to the paints as some were starting to harden. While doing this, I decided to clear out the interior of the caps, as this serves as a nice palette for mixing small quantities of paint. In truth, I do not have a large range of paints, but at most a dozen acrylics and inks. I use metal paints sparingly, so you will see dark grey highlighted with lighter shades or white to represent armour and beiges, oranges lighter browns for gold, as with the three lions on Richard’s banner and barding. 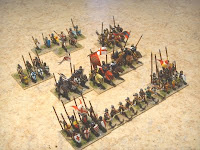 I debated about whom the General should represent, the King of Jerusalem or Richard the Lionhearted. I chose the latter as I could vary the flags and shield emblems. I am inclined to think; the King of Jerusalem should have the various Military Orders present which would give the army a uniform look. This is Richard’s army, straight off the boat and marching on to Jerusalem.

Enjoy the photos.
Cheers,
Posted by Timurilank at 02:56 3 comments: