I had not planned to complete these three armies in so short a time, but with my order of Legio Heroica coming this week I want to clear the work table. The weather here was extremely warm, so drying times were short. I also improved my technique for painting folds and outlining which quickened the pace.

Photo one, show the Serbian collection. The Serbs were off and on allies of the Byzantines, so clothing, arms and shields would be influenced by them. I still wanted the irregular look, so kept a balance between the linnen colour and the reds and blues one would expect for Byzantines. Not shown is the standard which has a cross. All flags were done but the fixative had to dry well before handling. 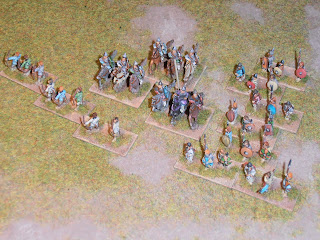 Photo two, are the generic Slavs (III-1c) which have a geneeral on foot. Lots of linnen, beige and btrown clothing. Shields are likewise leather covered wood. Banner, again not shown depicts a Griffon on a near white background. 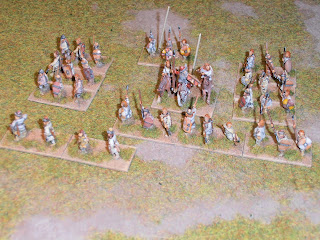 The Moravians in Photo three are the largest of the three armies as this has all possible options; extra bow and blades. These were covered in an earlier posting which mentioned their clothing styles and shield patterns were influenced by the "West". 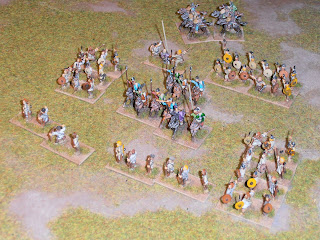 From receipt of package on the 22nd, all three were varnished, based and flocked by the 29th and this morning the flags were painted. As the creativity is still flowing, I shall work on the medieval flags for my next army, the 15th century Bavarians. 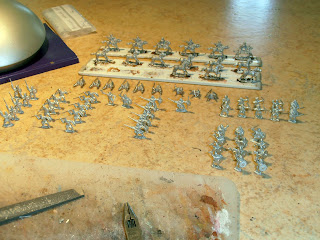 With the additional holiday tomorrow, these will be ready to varnish on Monday.
Cheers,
Posted by Timurilank at 11:49 No comments: