Interest in the Low Countries of the 15th century came as a result of my researching the Holy Roman Empire with a final goal of developing a campaign game, similar to one made for the Merovingian period. The Low Countries of the period encompassed modern day Netherlands, Belgium, Luxemburg, parts of Northern France and some German lands bordering Limburg. For most of the century these were the sovereign domains of three dynastic families, Luxembourg, Hapsburg and Wittelsbach.

Broadly speaking, the House of Luxembourg held Limbourg, Luxembourg and Brabant, which reached as far south to France and the House of Wittelsbach, the counties of Holland, Hainaut, Zeeland and Friesland by the first half of the 15th century slowly losing territory from dynastic marriages to Burgundy. Following the death of Charles, the Bold, the House of Habsburg asserted its sovereignty over Burgundian territories gaining all by the first quarter of the 16th century. During the 15th century, the Low Countries experience of economic and social growth among its urban centres followed a similar path to that experienced in Northern Italy and Northern Germany, but its town councils asserting more power than other parts of Europe. This was a time when trade and prosperity generated a relative period of peace. Yet, it was not without its disagreements.

There were few major battles in the Low Countries during this time, but in its place were an abundant number of skirmishes, sieges and plunder raids such as the one which devastated the Hague in 1528. High taxation, trade and customs barriers and succession disputes often led to conflicts between the duchies and counties of the Low Countries (see link below) and fortunately, many are documented in Dutch or the Frisian language. My research continues, but from what has been done I will pass on a few observations.

The sub-list IV/57c (1411-1478) for the Low Countries gives a large number of pikemen supported by billmen, crossbow, handgunners and artillery with a home terrain of arable. Designing a historical scenario, one may wish to consider adding a few optional troop types and include a second home terrain.

An arable home terrain suits the Low Countries, yet as one passes north of the Maas and Rhine rivers, littoral would seem a better fit. The Maas River empties into the North Sea passing the islands of Zeeland; the Amstel, Eem and Ijssel Rivers empty into the Zuiderzee whose shoreline touches the counties of Holland, Friesland, the Duchy of Gelderland and the Bishopric of Utrecht. More importantly, the cities of Deventer, Groningen, Arnhem, Nijmegen, Zutphen, and Zwolle were a part of the Hanseatic League, all with harbours on the coast or inland. Lakes, bogs and marsh were common enough to be present on the game board and with and for the modeller, most castles or fortified manor houses did have moats.

In the link below you have long list of internal conflicts, yet what is surprising, 57c is not listed as an enemy of itself. This is well the case with the Italian Condotta and the Medieval German, likewise, 57c should also be listed as an ally to reflect mutual assistance among counties and duchies.

While north of the Maas and Rhine River is not cavalry country, ducal retinues (3Kn/4Bd) or mercenary cavalry (Cv) would not be out of place on the battlefield, albeit in small numbers. At the Battle of Brustem (1467) 500 cavalry were present on the side of Liege when they faced a Burgundian host.

At times, guild infantry was less than enthusiastic to take to the field and in their place, mercenaries were hired from Flanders or Brabant. This can be listed as a separate entry for a portion of guild pikemen (4Pk or 7Hd). 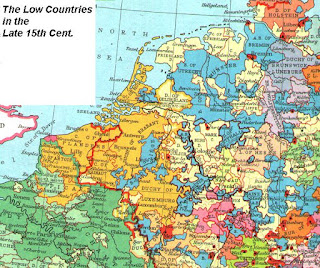 War in theNetherlands in the Middle Ages (Wiki) 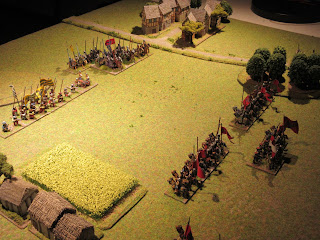 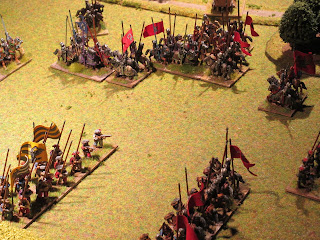 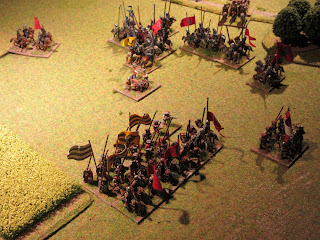 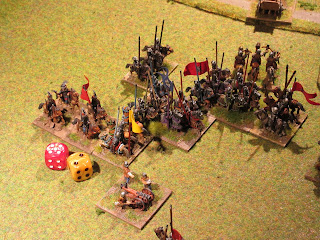 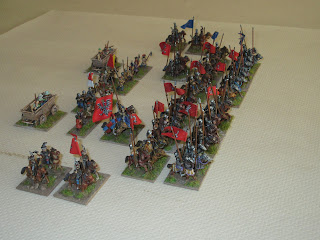 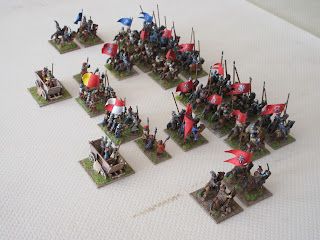 Posted by Timurilank at 01:36 No comments:

The campaign rules for 15th century Northern Germany are being developed and while reviewing old topics of the late medieval period posted eight years ago I thought updating them would prove helpful. Between 2012 and now much information has become available through the internet, book and video presentations.

Revising ‘Cities and Towns’ gave a better understanding of the guilds, armament, and upkeep of a walled city. Society changed dramatically as wealth would change hands to the urban elite from those of the noble families.

‘Banking’ also made significant advances beneficial for trade and commerce in the form of loans, interest rates, currency exchange and more. The need to fight banditry or piracy and overcome the disruption of incidental wars would move banking facilities to add ‘insurance’ to their list of services.

‘Commerce and Trade’ included some information of the Hanseatic League, but this topic will be treated in the topic listing the states participating in the upcoming campaign. As mentioned elsewhere, most of the participating states form the northern part of Germany and it was for this reason a new topic was added – ‘Geography of Northern Germany’.

The goal is have some aspect of each topic appear in the campaign rule set and for my own benefit some possible ideas appear at the bottom of each page. Banditry and piracy were a common affliction affection nearly all the North German States that work has also begun on a naval supplement. Naval conflicts were rare, but piracy was rampant. This will also mean adding ships to the collection.

Posted by Timurilank at 04:49 No comments: