After the recent sale of my Dark Age village, a replacement set was needed and this week, I began its construction using a system similar to the one used for the Celtic and Spanish village. However, some minor changes were made which worked to my advantage.

Styrofoam blocks were cut to form six buildings. Cut and trimmed, these would be glued to 40mm x 30mm bases which would facilitate handling the piece while applying Milliput to the walls and roof. 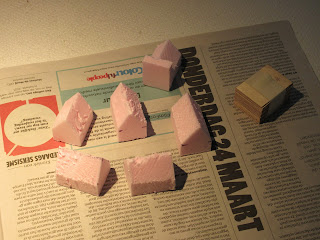 The application of Milliput was spread over three sessions to allow adequate curing before the next session.

Cutting a 15mm length from each epoxy stick, this would be enough material to cover two walls of two buildings. Smooth the Milliput over the walls and trim the excess with a modelling knife. Keep finger tips wet to smooth the surface as dry fingers will shift or lift your effort. Using a modelling blade, I scored the timber trimming. Allow a few hours to dry.

Complete the coverage of walls then score the timber and doors as a final step. Excess Milliput can be used to fill holes or uneven spots on the roof. Allow a few hours to dry.

The roof was next and all six structures were covered and trimmed leaving enough material to drape over the walls and gable. Using the back of the blade, I randomly made impression running the length of the roof, then, with short sharp strokes, scored the roof starting at the bottom gradually working toward the roof top. Note: Allowing the Milliput to dry between sessions avoided the mistakes made in earlier projects, such as leaving finger impressions, scoring misshaped or covered areas losing its Milliput coverage. Keep finger tips moist and you will avoid lifting the material. Use the base to rotate your work.

All six structures were given a white undercoat. The walls were painted first with a thin coat of mid-grey, GW Layer, Administratum Grey. Next came the thatching; for this step I used GW Layer, Baneblade Brown mixed with GW Abaddon Black and thinned this so as to spread easily over the roof. 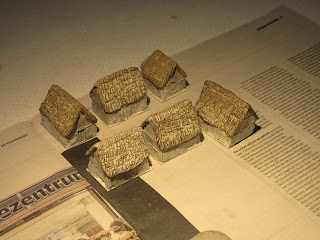 Allowing time for the walls and roof to dry, I dry-brushed GW Corax White – actually a pale grey. The effect is subtle and is not very noticeable in the photos. This was followed with a wash of GW Nuln Oil for each roof. Allow the Nuln Oil to dry before moving on to the next step. 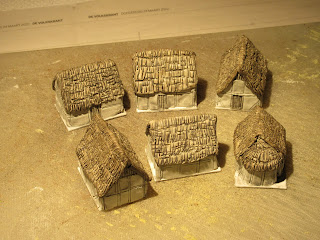 The timber trim and the bases were the final step. One could choose other colour schemes for wall and roof, but looking at many photos of reconstructions and models I opted for a quick solution. 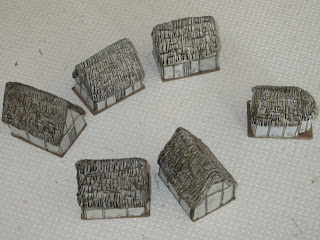 Time spent:  The first three sessions consumed an hour each, adding two or three hours between each session for the Milliput to cure, I would say this was a day well spent.

The following morning, painting the buildings took very little time, but sufficient time to dry was needed before dry brushing. Total time spent painting was less than an hour.

Posted by Timurilank at 00:33 No comments: