On an open plain near the Drava River in Pannonia, Theodosius planned to end the usurpation of Magnus Maximus. Maximus had other ideas and with loyal units from the west, he enrolled the aid of Rugian mercenaries to meet Theodosius and his reconstituted eastern army that now included Goths, Huns and Alans.

The road to Poetovium, flanked by rain sodden fields and woods offers a relatively open plain.

Maximus deployed the majority of his cavalry on the right intending to envelop the enemy line while his centre and left would hold the enemy at bay. The battle opened with the Rugian mercenaries positioned on the left.

Theodosius seeing the overwhelming number of cavalry facing his left, decided to send his light horse to delay their approach, the main assault would take place in the centre.  To support the infantry, Theodosius positioned the clibanarii on their right with orders to keep pace with the infantry line. 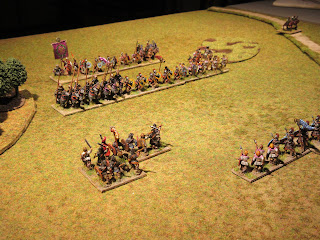 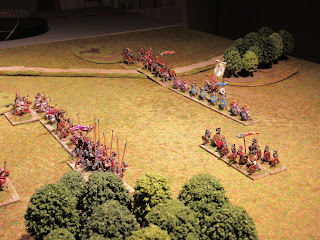 The infantry lines clashed and the legions of Maximus gained the initial advantage. Elsewhere, the cavalry of Maximus had a difficult time of dispersing the enemy light horse, despite their superiority of number. 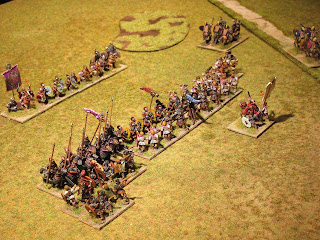 Driving the Imperial centre further back, the legions of Maximus were confronted by a second line with the Imperial banner among their ranks. Theodosius moved his second line forward to meet the enemy legions. On the Imperial right, the clibanarii destroyed the Rugian mercenaries. Maximus’ fate was sealed as Imperial archers put to flight a unit of auxilia and were now facing Maximus and his guard. It was time to leave.. 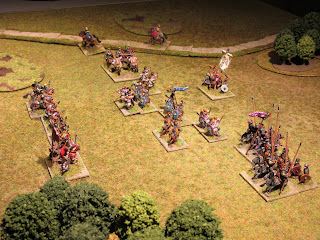 Posted by Timurilank at 00:35 No comments:

During the period of making terrain mats, terrain pieces that were not up to the new standard were disposed of. The new terrain items fit better in their boxes which means fewer boxes are pulled out for a game; a big plus. 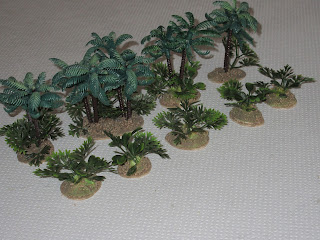 The palm trees have no vegetation fixed to their base so these can be used for either tropical or desert games. During my excavation, I found plastic Christmas wreaths purchased 15 years ago, and one with leafy ferns proved suitable for tropical foliage. 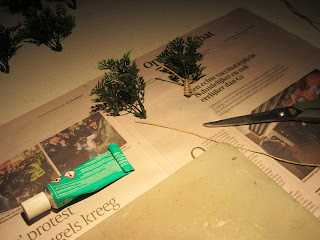 Using a general-purpose glue, two fern pieces were tied together with string to make each tree. Tightly winding the string will create a trunk. Let this dry longer than usual as the curvature of the branches will offer some tension. 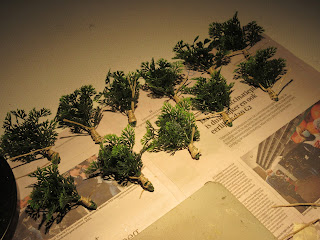 Clip with scissors and glue the pair to a suitable base. An ‘A’ frame support was constructed to hold the trees upright while bonding. 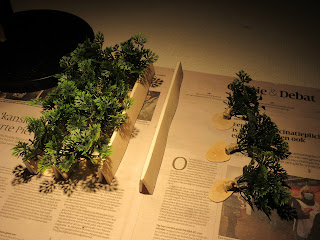 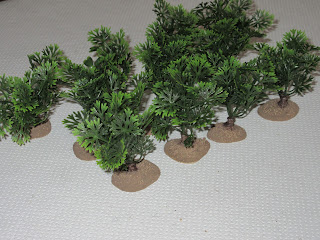 Spread Milliput around the base to disguise the trunk, this will also add weight and further secure the tree to its base. Paint the trunk and base to taste and spray with a mat varnish. 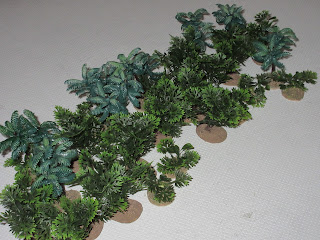 Posted by Timurilank at 02:00 No comments:

Three terrain mats (160cm x 80cm) are now complete, one sea, an arid and one for Mediterranean lands. Work on temperate terrain mat will begin next week; its use should cater to all the conflicts north of the Alps. Ground colour and grass flocking will differ from the Mediterranean and the first step is to do a test on an old unused DBA size board.

I painted white the underside, as this will negate any possible curling, followed by a day later, the top. Next, an earth colour was mixed using Burnt Sienna and Green with a touch of black. From the photo you will note the test sheet displaying before and after adding black. 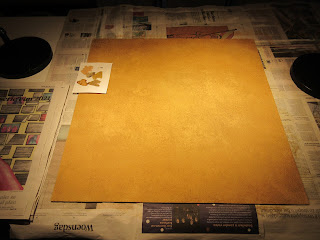 A day later, I sponged a darker shade to simulate undulating ground. This step required the use of two sponges; one rough, to apply the paint, the other, a feathered sponge to soften the edges. 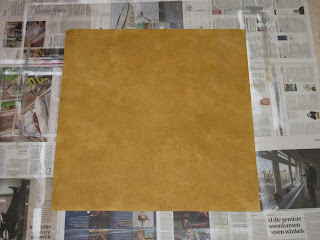 Next, spray diluted white glue over most of the surface and sprinkle grass flocking, Busch 7114, autumn shade. Let this thoroughly dry before tapping the excess off. 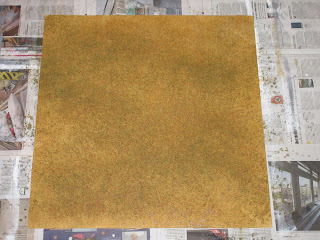 Spray diluted white glue over the entire surface and sprinkle with a darker shade of grass. I used Busch 7111, labelled May Green. 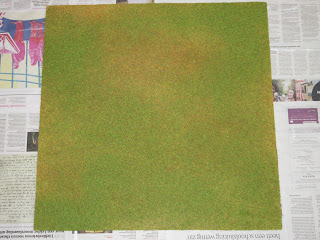 Tapping the excess grass off displays the final result. 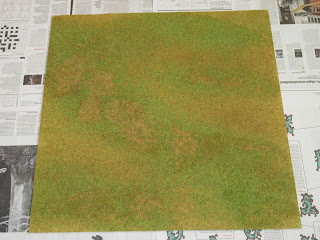 I would recommend a coat of diluted white glue to seal the work, but then the movement of troops and tumbling dice would expose more earth which might be realistic.

The large Temperate mat is complete as are the terrain pieces to be used with this. Photo one illustrates the ground colour, Burnt Sienna and Black were mix, later Green was added to reach an earth colour. The large mat had an undercoat of white which made painting easier. When dry, the mottled effect was applied using a feathered sponge and diluted Burnt Sienna and Black. The lighter areas are the result of rigorous action with sponge technique. 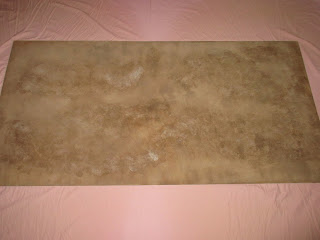 Application of grass was done in two stages; stage one used a colour grass of a darker shade, followed three hours later with a lighter shade. The following morning, excess grass was tapped off revealing the final result. 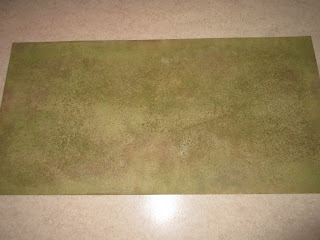 I am pleased with the large game mat and the terrain pieces. Finishing ahead of schedule has earned a few days to relax before travelling this weekend.

Posted by Timurilank at 01:41 No comments: