Guthfrith, the Norse king of Dublin,  briefly ruled Northumbria passing away in 934. King Athelstan of Wessex, seized the moment to solidify his authority on the north and assembled an army at Winchester. Marching north he would meet allies, a few of which the Anglo-Saxon Chronicles list the Welsh kings Hywel Dda of Deheubarth, Idwal Foel of Gwynedd, Morgan ap Owain of Gwent, and Tewdwr ap Griffri of Brycheiniog and thirteen earls, six of whom were Danes from eastern England.

“Aethelstan’s invasion of Scotland” found at Wiki offers the following:

“The invasion was launched by land and sea. According to the twelfth-century chronicler Simeon of Durham, his land forces ravaged as far as Dunnottar and Fortriu in northern Scotland, while the fleet raided Caithness by which a much larger area, including Sutherland, is probably intended. Caithness was then probably part of the Norse kingdom of Orkney. Owain was defeated and it is unlikely that Constantine's personal authority extended so far north, so Æthelstan's attacks were probably directed at Constantine's allies, comprising simple looting expeditions.

In contrast, the Annals of Clonmacnoise presents the invasion in a different manner; "the Scottish men compelled [Æthelstan] to return without any great victory", Lacking archaeological evidence, we cannot know for sure if an engagement did take place, nonetheless, this does offer an opportunity for a battle, pre-dating Brunanburh.

This fictional encounter, Constantine II is defending, placing two difficult hills and two wood on the game board. No road, therefore Athelstan may choose any one of four sides.

The Invasion of Scotland, 934, Medievalists Net 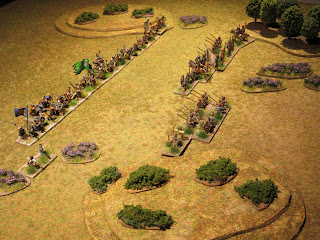 The Scots advanced in two groups, the right under the direct command of Constantine quickened their pace to meet the enemy while the left wing moved cautiously forward. To confront the Mercian and Saxon centre. As the lines met, the Welsh fell before the long spears of the Schiltrons opening the Saxon left. 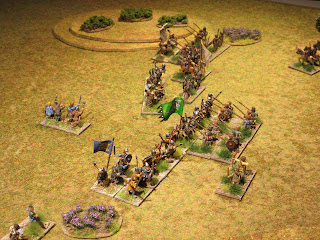 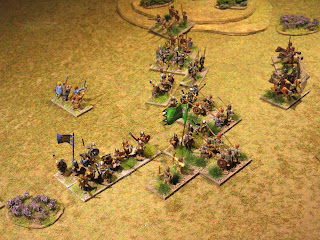 Reinforcements were sent to bolster the left flank, but seeing unopposed Scots moving toward the centre, Athelstan called for a general retreat, extricating his troops from an impending encirclement. A convincing victory for the Scots, 5 – 0.

The result was not quite as I expected, taking less than four turns, therefore a second battle was played, both sides deploying as before, but swapping sides. 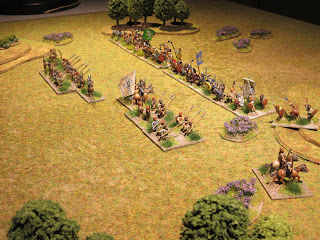 The Welsh seemed not to have their heart in the game and were again mauled, this time the aide of the Scottish light horse.  of the Scots joined in on the drill. To their right, the Mercians were next to fall collapsing the Saxon line, creating a second victory for the Scots, 5 – 0. 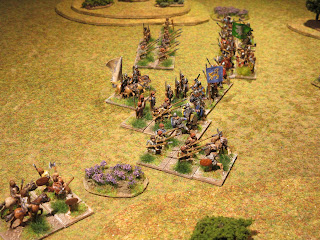 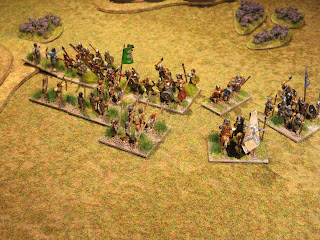