I had recently finished a number of Spanish infantry of 1809 of which white is the dominant colour; coat, breeches, canvas bag, and belting for canteen (gourd), bayonet, cartouche and backpack. Nuln Oil (GW shade) was used in a number of YouTube tutorials to define all of the above. I therefore decided to change my old school practice of lining the above with black ink, later dark gray and try Nuln Oil.

Rather than begin with the Spanish, as I was uncertain about the end result, I thought it prudent to practice on an army with a similar clothing and found the Umayyad Arabs would do.

I have two DBA armies, so began applying Nuln Oil as was demonstrated in the videos and after completing all twelve elements realised my Umayyad had change their allegiance to become Abbasid (black clothing).

I decided to correct my technique for the second command and thinned the Nuln Oil with water and limit my shading to the folds and where belting met clothing, leaving enough of the original white exposed. The difference was amazing. A good amount of highlighting was needed to bring the first command back to the Umayyad fold while the second required much less.

This may seem ‘old news’ for the younger generation of painters, but for this veteran of 72 years, an old dog can learn new tricks. 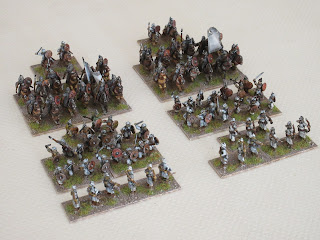 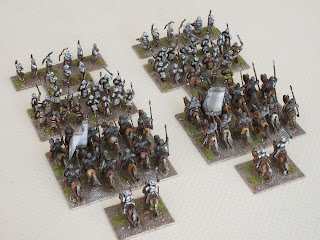 Now, on to the Spanish infantry.
Posted by Timurilank at 12:56 1 comment: