Battle of Magnesia 190 BC

The Battle of Magnesia has remained on our ‘to do’ list for quite some time as our primary obstacle was reconciling the troop strengths for the DBA big battle option. Ancient and modern historians are in conflict to the actual numbers as Livy and Appian quote 70,000 Seleucid which seems high by modern historians against a total of 35-40,000 for Rome and Pergemon. We decided to use the Seleucid Army by Bar Kochva for his detailed analysis of the deployment and battle. Using the figures quoted above, this works out to a ratio of 7:4.


Regarding the strength of the Roman force I am not convinced that this exceeded 35,000 as anyone familiar with Livy’s history of the War with Hannibal are aware that consular armies were relatively fixed at 20 to 25,000 troops. This gives us two Roman legions, two Latin legions, each with its component skirmishers and cavalry. Following the end of the Second Punic War there is little evidence of any reforms that would generate an increase of troop strength for the consular army. For this project we will use the figure quoted above and plus the 10,000 Pergamene troops led by Eumenes.


Historical numbers to elements
Readers who regularly follow this blog are aware of the number of historical refights we have done with unequal sized armies. Most however, seem small incomparison to Magnesia, but we were up for the challenge. Using our ratio of 7:4, Rome/Pergamene would consist of three commands of 12 elements each, For the Seleucid, this produces a total of 63 elements which will be deployed among four commands.


While researching the army strengths for both sides, I found Luke Ueda-Sarson’s website extremely helpful as he lists the various contingents for a DBM game. Using Livy and Appian as references and the DBM historical scale, this came to 236 elements. Dividing this quantity by four for DBA we arrive at a total close to our original abjective.
Number of Commnads
The decision to organize the Seleucid in four commands is based on the historical account of the battle. The Seleucid engaged Rome successfully on their right while incurring an opposite result on their left and the latter resulted in a cascade of setbacks for the Seleucid army eventually leading to the collapse  of the army. Fielding four commands for the Seleucid felt about right as both wings would have higher pip priority than the two central commands. The following list is tentative as the comporsition of left center and left wing commands may change slightly.


Composition of the Seleucid army:


Each Roman command lists both Roman and Allied (Latin) types. This is done for the convenience of players wishing to duplicate the historical deployment of troops. Do note, the totals may be subject to change following our test games.


Illustration: Hellenistic bronze plaque, discovered during the German archaeological campaigns in the Acropolis of Pergamum at the end of the 19th century. The piece, which was lost and of which there remained only a pen-and-ink illustration by Alexander Conze (1913), likely depicts the Battle of Magnesia in 190 BC. The Roman infantry, the Seleucid phalanx and the Attalid cavalry are shown. – Wiki (public domaain)
Posted by Timurilank at 00:44 3 comments: 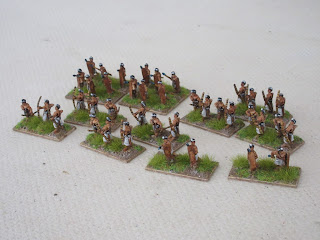 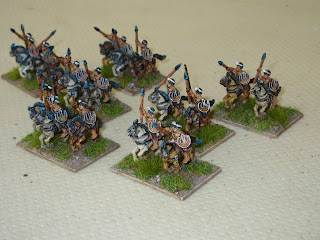 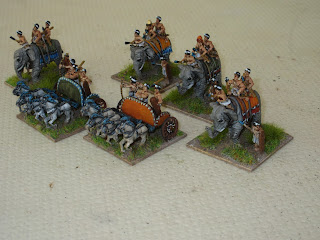 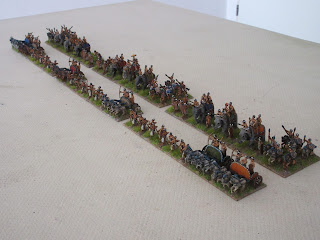 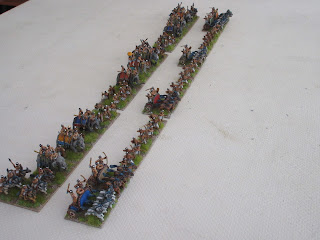 We followed up our previous set of games with a second set using the Bactrian all cavalry option. Historically, such a force would most likely counter the nomadic incursions of the northern regions of the kingdom but an unlikely encounter against the Mauryan Indian seemed too good to pass up.  The Graeco-Bactrian are invading the tropical region of the Mauryan kingdom which in this case had woods and marshy ground. Army composition can be found below.

Game one.
After reading the Byzantine treatises Strategikon by Maurice I decided to impress the Mauryan with a bit of fancy deployment. The Mauryan placed their troops in the  ‘hammer and anvil’ formation which had served them well in the past. 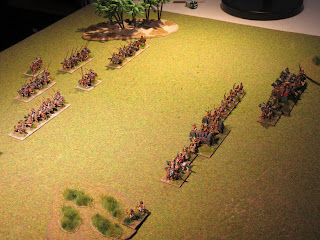 The Bactrian began the battle with a left hook by the cavalry wing with the Iranian lancers in support. The Mauryan were prepared for such a maneuver and countered the assault with their chariot corps supported by their cavalry. 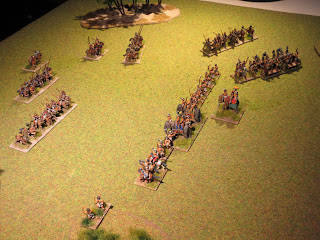 Unfortunately, the Iranian lancers fell foul of the Mauryan archers leaving the Bactrian spearhead powerless to continue with their assault. Blunted and broken, this was a fine example that some treatises should remain on the book shelf. Score 4 – 0 Mauryan Indian. 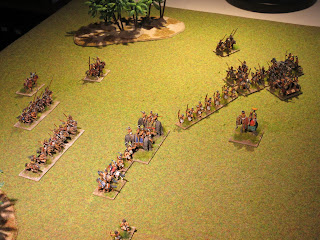 Game two
The Bactrian humbled, now deployed in one large group with Iranian lancers in front flanked by cavalry and to its right a small column of light horse archers formed up to support them. The Mauryan infantry formed the center with the mounted troops evenly divided on both flanks. 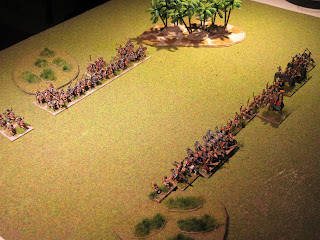 In successive waves, the Bactrian assaulted the Mauryan left flank committing two-thirds of its total force to the effort. 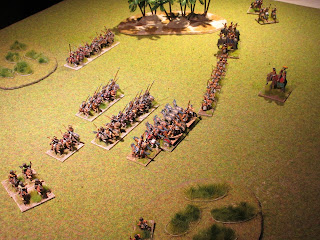 The Mauryan countered this threat by wheeling the archers left to pelt the supporting lancers with arrows. 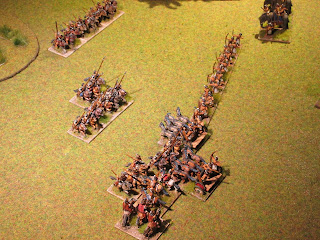 This action developed into a desperate struggle with both sides losing heavily. The gods smiled on the Bactrian as they were able to claim a narrow victory in the final moments of the game. Score 4 - 3 Bactria. Game three
With a victory for each, both sides were eager for the final engagement. The Mauryan anchored their right near the marshland area leaving the open ground for the infantry and elephant corps. Facing them in one long extended line were the Bactrian with lancers in center flanked by their cavalry. Bactrian light horse formed to the far right beyond the wood. Their task was to encircle the Mauryan force and immobilize the elephant corps. 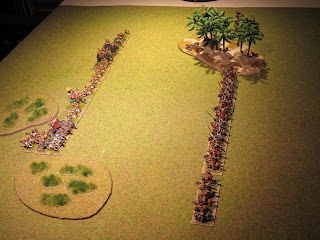 The battle opened with the light horse executing their orders prompting the Mauryan to drop troops back to cover their exposed left. The remainder of the army wheeled right and closed the distance between the two armies. 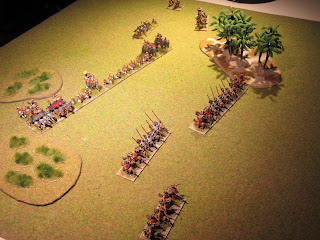 Bactrian cavalry on the left effectively neutralized the Mauryan chariot corps isolating the archer group of its right wing support. The havoc created by the Bactrian light horse forced the Mauryan commander to feed more troops to hold the Bactrian threat to its flank. 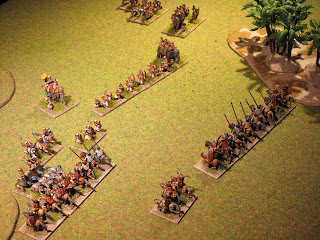 Mauryan archers moved close enough to inflict damage among the lancers, but this was poor compensation for the heavy loss to the right wing forcing the Mauryan to abandon the field. Score 4 – 2 Bactria. 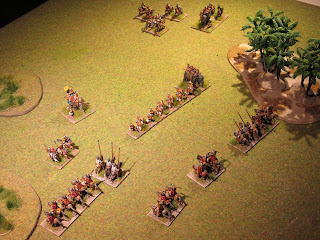 Note:
The latest edition of Armies of the Macedonian and Punic Wars by Duncan Head has rejected the Iranian lancer figure as being Graeco-Bactrian but possibly a Chionite Hun or similar of a later period. The figure originally thought to have come from a Bactrian Silver cup was wrongly dated and is actually from the 3rd to 5th century AD. This begs the question who were the lancers and what did they look like?