Last month I finished three armies of Ottomans but not had the time to use them in battle. Following the discussion about LH rear support and flee movement I decided to test them last night.


Both Ottoman and Hungarian armies are based on the proposed lists for 3.0 giving the Ottomans an element of Serbian knights and the Hungarian better options balancing cavalry and foot.

Photo 1
Between the woods and low hill, the Ottomans are deployed in a deeper formation to meet the Hungarian infantry wall. Supporting the infantry wall are Hungarian knights and positioned to the left flank are light cavalry. 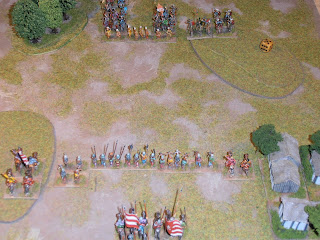 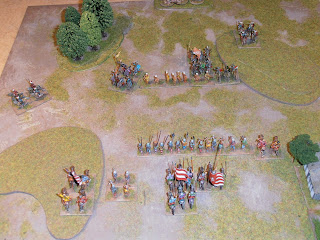 Photo 3
Hungarian LH, now occupied to their front are helpless to counter the Ottoman Akinjis flanking move. Hungarian knights and skirmishers are dispatched to deal with them. Center is now engaged while the Ottoman left flounder against the Cumans. 0 – 1 Hungary. 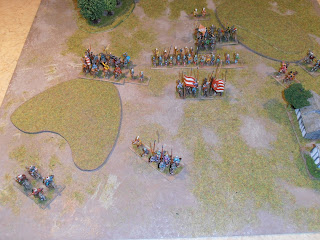 Photo 4
The Hungarian infantry hold the Ottomans, who are now helpless to make any break through. Even the Ottoman heavy cavalry are stopped at the base of the hill. 0 – 2 Hungary. 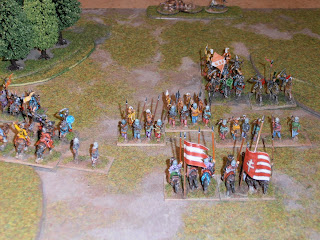 Photo 5
The only units fleeing were skirmishers. LH were tenacious and died on the spot. Here, the Serbian knights have broken through and beating the Hungarian CinC back. Hungarian casualties fell in quick succession, but at cost to the Ottomans. 2 – 3 Hungary. 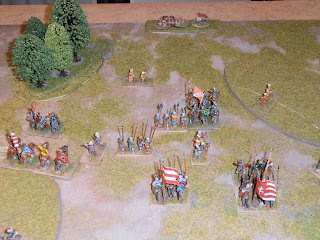 Photo 6
Ottomans, catching their second wind, sent their lights to support the left wing and center. Ottoman reserves deployed to support the Serbian struggle while the Akinjis, behind the Hungarian lines became active. The Hungarian response, with a pip roll of one, gambled and did the unexpected. Lights attacked the Akinjis uphill and beat the snot out of them. Horse meat is back on the menu. 3 – 4 Hungary. 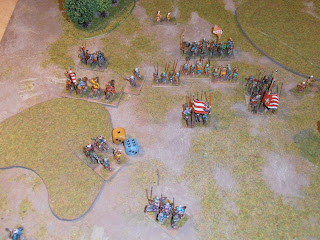 Photo 1
Ottomans redistributed their winning side to the right flank. Cunning plan nr. 321: Anchoring the left on the woods, the right wing and center would move to the right forcing the Hungarian battle line to wheel. To the left and behind the woods held by skirmishers were two elements of Akinjis. 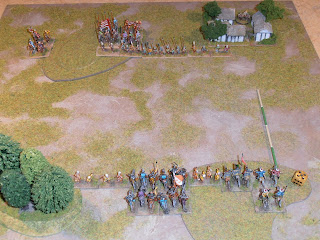 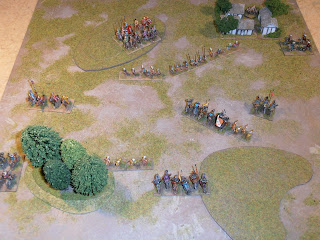 Photo 3 and 4
LH support did not shine this time, but delivered up another plate of horse meat. Hungarian battle line are wheeling at a quick pace forcing the Ottomans to counter with their heavy cavalry. Lower left, the Akinjis are bottled up by eager Cumans. 1 – 1 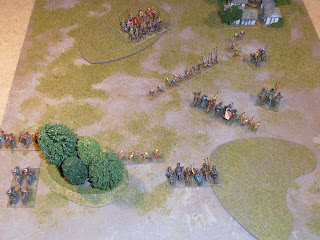 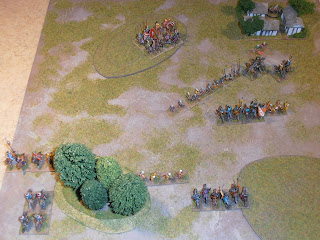 Photo 5
The Ottoman cavalry facing the Hungarian infantry are sliced, diced and sautéed. Unfortunately, the CinC was processed as well, ending the game. 1 – 4 Hungary. 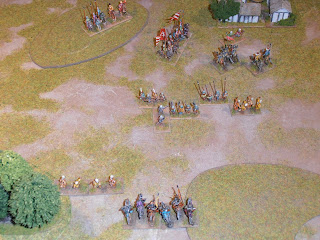 LH rear support is much like a Christmas present, you don’t open it before time
Cheers,
Posted by Timurilank at 23:56 No comments: