The comments have been surprisingly favourable for the enlarged single command. Below are a list changes to the standard game.

The number of terrain features for use with the BBDBA option are increased, but all our tests found no reason to increase this for DBA24, for two reasons; larger pieces could now be used and discarding pieces due to lack of space became a rare occurrence.

DBA24 simply duplicates the number of elements forming a single command. For some armies this will mean other options can now be used to bring the total number of elements to 24. The Han Chinese as an example may field a mix of infantry and cavalry or alternatively an all-mounted command. 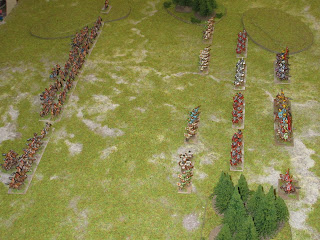 Twice the number of elements will also produce two generals. One is designated a CinC with the second serving as a subordinate general. Although the loss of the subordinate general counts as one element lost, his function is to extend the command distance a further 8BW. If the CinC is lost during battle, the subordinate assumes command of the army on the subsequent turn.

If employed, this too will double in size with a possible increase in the diversity of troop type.

Players familiar with DBA are aware that demoralisation of a command is a feature found only in the big battle option. Demoralisation is reached when it suffers a certain level of losses precipitating the flight its elements to an army’s base edge. The rule is particularly useful if playing medieval period scenarios that divide an army’s force into three ‘divisions’; van guard, main division and rear guard.

To determine the ‘demoralisation’ for each ‘division’, calculate this as a third of the division’s original elements, excluding horde and camp followers. Reaching demoralisation, flight would take place on the player’s next turn. Expending pips, a player can hold elements or groups in place with the process repeating each turn. Victory is reached when 8 elements are lost or (new) if two of the three divisions (vanguard, main battle or rear guard) are demoralised. (see page 13, paragraph 7).

Beginning DBA24 may require some adjustment as movement will seem slower than one is used to. The standard 12-element game, a decision can be reached on the 4th or 5th turn, but an extra two turns were all that was needed to declare a victor. Some games were resolved in 40 minutes needing seven turns while the longest required thirteen turns or 70 minutes to reach a decision.

The single die cast to shift 24 elements required some rethinking as troops needed three or four turns to move assault troops and supporting elements into striking distance. What has worked successfully is following the ancient text books regarding deployment, regrouping fragmented formations and the use of reserves.

Click on the Index to Storm Within the Empire, scroll to the bottom to find Enlarging the Single Command to 24 elements which lists many examples of battles.