The Russo-Swedish War of 1495–1497, overshadowed by the Italian War, did bring together two significant powers as allies; Hans, King of Denmark and the Grand Prince Ivan III of Moscow. The target of their combined might was the southern region of Ostland, then ruled by house of Sture. This consisted of the counties of Vyborg, Savonlinna and Hämeenlinna and to protect the people of Western Finland, Sture enlisted the aid of German mercenaries and people from Sweden.

In the autumn of 1495, Moscow sent an army to lay siege to Vyborg Castle and after an unsuccessful three months, the siege was lifted. Undeterred, Ivan planned another campaign for the following year and this army would be led by Russian generals Vasily Kosoy and Andrey Chelyadnin with the sole objective to devastate Swedish Ostland as far as Hämeenlinna (Tavastehus).

Our game will focus on an episode of the Russian chevauchee and players of DBA3 will note, neither are listed as enemies of one another. Despite its omission, our hypothetical clash of arms is set for the year 1496.

The following lists are used without alteration.

The communities dotting the coast of Ostland are littoral for the defending Swedes giving them a waterway, hamlet and several wood.

Informed by scouts that the nearby fishing community was defended, General Vasily Kosoy rode ahead with a small escort to view the disposition of enemy troops. Quickly assessing the situation, militia troops would move along the shore. seize the village and destroy it. The boyars and their retinues will smash the peasants formed in battle line, nothing fancy thought Kosoy.

A veteran in the war against the Danes, Gustav laid out his plan to defeat the Rus to his Leidang. 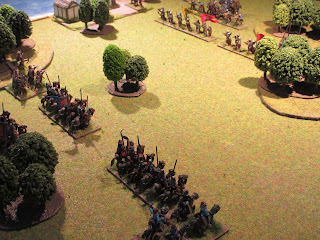 Putting spurs to the flank of the horse, the Russian cavalry dashed forward, leaving their militia infantry behind and tossing the general’s best laid plan in the dust. The Tartar light horse, equally animated, circled the woods intent on reaching the rear of the Swedes. 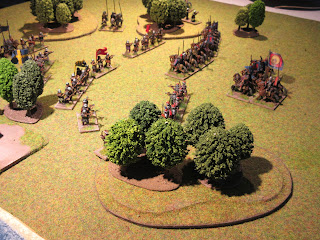 The shock of cavalry was met by Leidang spears and halberd and interspersed were crossbowmen dropping horse and rider with unerring accuracy. Repulsed by the sudden hail storm of bolts, the Russian cavalry regrouped to charge a second time. Meanwhile and beyond the wood, a dismayed Tartar light horse were met by smaasvenner cavalry who cut down half their number leaving the remaining half to reconsider other options. 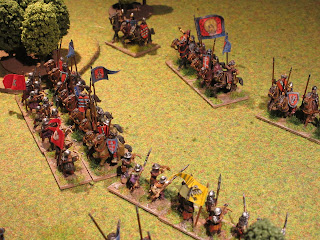 The Swedes defiantly held their ground leaving the supporting Russian cavalry to look on as spectators. Quick thinking mercenaries in Swedish employ fell on the open flank of the engaged Russian cavalry initiating a chain reaction of destruction and eventual flight of few survivors. The assault on the defended village met a similar fate, leaving General Vasily Kosoy no option but to withdraw his severely mauled force and look for easier pickings.

Posted by Timurilank at 00:04 No comments: