Not all the people known as Alani moved westward during the period of the great migration. Those Alani who settled in the northern Caucuses sought a life as farmers and cattle herders, nonetheless, in emergencies they could muster a cavalry force of nearly 30,000 according to Arab sources. As early as 715 AD, the Umayyad invaded the Kingdom of the Alani only to be repelled. Later invasions by the Umayyad and equally unsuccessful, encountered the Khazar allied with the Alani.

Game one
Awaiting the arrival of the Alani, the Umayyad positioned its infantry in centre with the bulk of its cavalry deployed on the open right flank. Hills secured the left flank and here, archers supported by cavalry were placed. The approach of dust clouds finally settled revealing the bulk of their army facing the Umayyad right flank forcing their general to revise his plans. 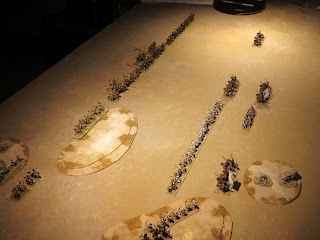 To meed the impending threat, the Umayyad general shifted his reserve formations from its position on the left flank to the right. No sooner were the orders given the Alani were seen moving forward. 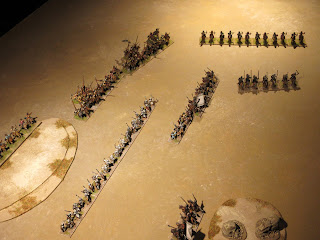 The situation on the Umayyad right becam desperate as new lines were adjusted to meet the Alani attack. In the maelstrom of charge and countrecharge of lancers and horse archers, the Umayyad subordinate general was severely wounded and carried off the field. A panic gripped the Umayyad right forcing the Umayyad commander no alternative but to call a retreat. Score 8 - 2 for the Alani. 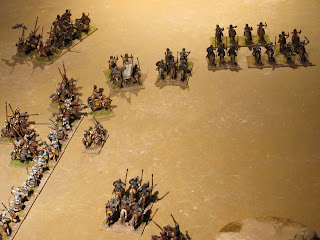 Game two
With reinforcements, the Umayyad continued their campaign north of the Caucuses and found the Alani prepared for a fight. A light cavalry screen shielding their heavy lancers positioned in a second line and meet the Alani deployment, Umayyad spearmen, supported by archers formed the Umayyad centre with the bulk of the cavalry forming a reserve. Smaller detachments of cavalry protected the extreme left and right flank. 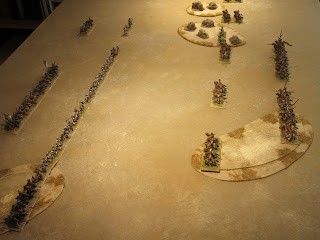 Umayyad infantry line right wheeled so as to approach the enemy better and have the left less exposed to an Alani flank attack. On the Umayyad right, Jund cavalry easily dispersed Alani light horse but the threat on the left flank was now critical. 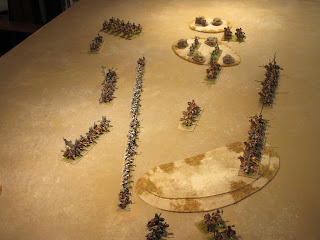 Moving relentlessly forward, the Umayyad infantry drove the Alani light cavalry back and seized the rough ground to threaten the Alani position. This forced the Alani to commit their lancers to action. 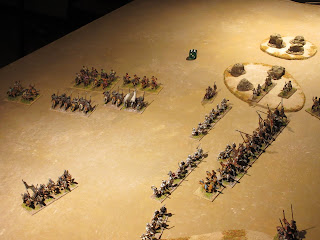 Casualties fell heavily on both sides, yet both commanders were determined to battle despite the cost. The anticipated Alani attack on the enemy’s left flank however, could not gain ground and pressure from the Umayyad right forced the Alani commander to call for general retreat. Score 8 – 7 for the Umayyad. 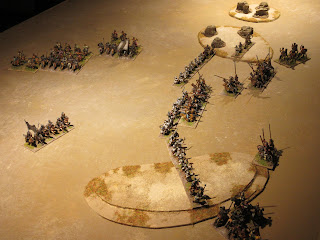 Posted by Timurilank at 00:20 No comments:

Following Rome’s victory over Carthage, ending the Second Punic War, the senate reviewed its overseas policies with respect to Hispania. During the conflict with Carthage, Rome successfully invaded the peninsula at two areas which later to became the provinces of Hispania Ulterior and Hispania Citerior. Following the war, the process of Romanization of the Iberian tribes would take nearly two centuries to reach its completion during the reign of emperor Augustus. Hispania would prove a vital testing ground for tactics and reforms of the military.

Game one
After a period of capturing towns and villages, Rome found the Iberian horde offering battle positioned between two steep hills. A village split their line in two and this offered the consul an opportunity to defeat the enemy in detail. Holding the Iberian right wing back, Rome would focus its attention on the Iberian left wing, first clearing the hill of its defenders to take advantage of an exposed flank. The Iberians had other plans and caught Rome off guard with the rapidity of their assault on the Roman left. This placed the Roman left-wing scrambling to establish a new defensive line. 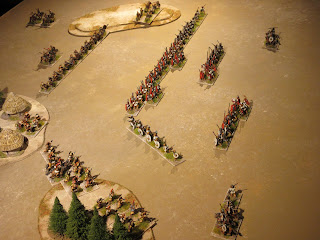 The situation on Rome’s left escalated such that reserve units of triarii and hastate were taken from the main assault. This kept the Iberians in check but had the unfortunate result to weaken the main assault easily held back by the Iberian centre. Losses on both sides were high but seeing no opportunity to turn events around, the consul called for a retreat.  Score 9 – 8 for Iberia. 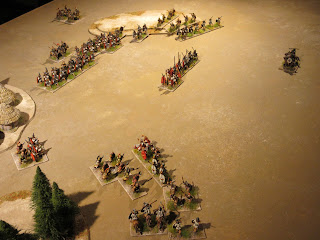 Game two
Following their victory, the Iberians pursued Rome forcing them to give battle. Near an abandon village, Rome deployed in its familiar formation with legions in centre and on its flanks, the allied infantry. 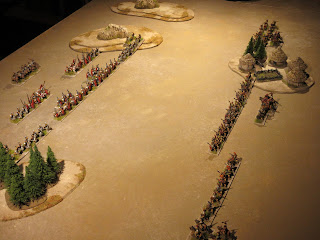 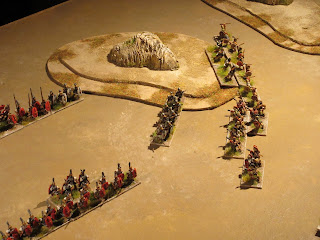 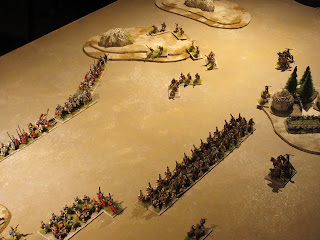 The Roman assault on the Iberian centre quickly gained ground as the hastati and principes cut through their line. Seeing the collapse of his centre, the Iberian warlord called for a retreat. The battle proved costly to both sides, but Rome held the field. Score 8 - 7 for Rome 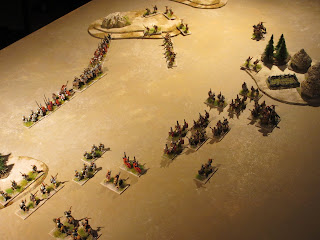