The Later Moors complete my list of enemies for the Roman Empire in the west. Comprised of light Horse and “fast” infantry, these are not thought of as shock troops. A player will find himself grasping for every minute advantage to inflict an enemy casualty; highly recommended, is a large capacity for patience.

These figures are all Old Glory 15mm and now form two commands. All the infantry were salvaged from my extras box and a recent order of three packs of Numidian cavalry completed the mobile arm of the two armies. 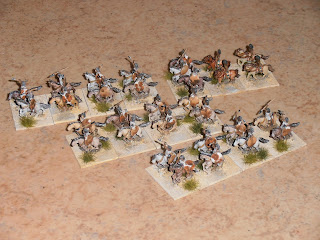 Painting the figures is not particularly difficult, so I spent extra time highlighting and detailing the figures. The hide covered shields are inspired by the fine examples illustrated at the website of Little Big Man Studios. They offer Numidian decals for shields for 28mm figures.

A cloak will be added to the Commander figure as well as two standards to denote the command elements. This will have a disk with streamers hanging underneath which is similar to the Punic style, but without the Crescent symbol. 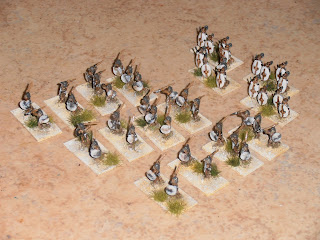 In the background are four elements of “imitation Legionnaires” are Roman trained auxiliaries which are an option if these are to be used as Numidian of the earlier period. Two of our club members have Polybian and Marian Roman armies, so they now have another enemy to contend with.

DBA 3.0 army list for the Carpi is identical to the Dacian one. Extra falxmen and Sarmatian are listed as an option and if playing with one or two commands, I would suggest using the allied contingent option to increase the number of Sarmatian knights.

Gathering information about the Carpi did gather some useful bits of information which may prove useful in a campaign setting. One source mentions that during the invasions during the Marcomanni Wars of 160 – 180 AD, the Castoboci, neighbors of the Carpi were an active participant. It seems a stretch, but may prove useful in a campaign against the Marcomanni to have several elements of Carpi as allies.

After the Antonine Plague we read of the migration of major tribes to fill the void and next to the Goths, the Carpi emerged as a major power north of the Danube by the third century. Most of these accounts record invasions by the Carpi singly or in alliance with the Sarmatae or Germanic tribes with Moesia Inferior as their primary goal. This did create a situation of uncertainty in Roman held Dacia as to the loyalty of the inhabitants.

Carpi attacks on the Danubian frontier (238-50) from Wiki.
238: The Carpi launched their first recorded major incursion into Roman territory south of the Danube, during the brief joint rule of the adolescent Gordian III. These were dealt with by the governor of Moesia Inferior, Tullius Menophilus in 239.

245-247: This second recorded incursion, the emperor Philip the Arab (244-249), took personal command and launched a major counter-attack. This brought the Romans to the homeland of the Carpi where after a long siege and failed relief of a major stronghold, the Carpi sued for peace.

Sarmato-Gothic invasions of the Roman empire (250-270)
250-251: Under the leadership of the Gothic king Kniva, a massive force of Goths Taifali and Vandals invaded Moesia Inferior. This included a small contingent of 3,000 Carpi according to Jordanes. To confront the invasion, the Roman emperor "Trajan" Decius with a mobile force of crack units dealt Kniva a number of setbacks.

Surprising the emperor, Kniva moved on an undefended Thrace forcing the Romans to counter the move through forced marches. Kniva inflicted a major defeat on Decius’s exhausted troops forcing him to withdraw from Thrace. Laden with plunder, the barbarians were caught at Abrittus were Decius with a reconstituted army defeated Kniva. Unfortunately, pursuing forces including the emperor became bogged down in difficult terrain and were massacred. The newly proclaimed emperor, Gallus concluded a peace with the Goths.

252-253: A renewed invasion of Moesia brought the Carpi in an alliance with Goths and Sarmatian tribes. Due to losses from the previous campaign and a pandemic, Roman resistance was light allowing the barbarians to cross into Asia Minor. The army of Pannonia led by Aemilianus scored a victory and followed the barbarians to recovery lost booty and Roman civilians.

Hailed by his troops as emperor, Aemilianus marched on Rome. Rather than fight a Danubian army, Gallus was murdered by his own troops. Three months later Aemilianus met the same fate by the same troops.

Valerian, now proclaimed emperor brought together with his son, Gallienus the needed stability to a chaotic period.

256-257: The Carpi, with the same allies as in 253, burst into Moesia, ravaged Thrace taking advantage of Valerian’s presence in the East and Gallienus attempting to stem the Germanic invasions. All Greece was now threatened. The barbarians were eventually routed by Gallienus' lieutenant Aureolus.

259-260: A new invasion, including the Carpi, split their forces into two armies. One invaded Greece and the other marched on Italy. Athens was sacked but Rome’s walls were too strong giving the Goths no other alternative than to ravage the whole of Italy. The latter were finally driven out by Macrianus’s Rhine army.

265-266: Further incursions took place in the form of a seaborne invasion of the Aegean in 267-268. In both invasions, the Carpi are no longer mentioned by name, however, the province of Dacia was abandoned by the Romans around AD 275.

The Carpi are three commands strong and offer a different enemy for Rome. They are "fast" moving and supported by falxmen (blade) can hold there own against Rome. With an allied contingent of Sarmatian knights my bet would be with the barbarians. 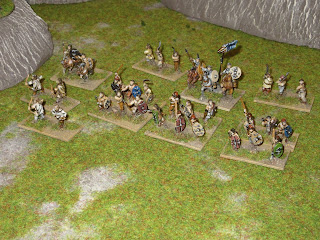 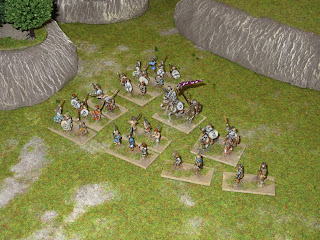 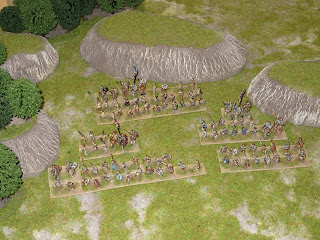 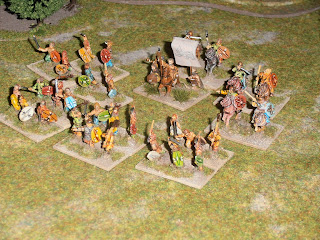 Cheers,
Posted by Timurilank at 02:48 No comments: 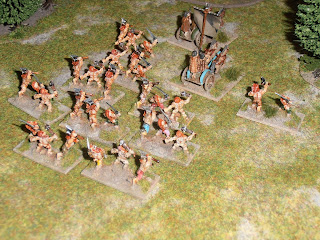 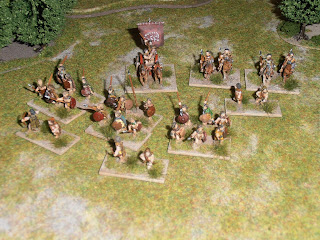 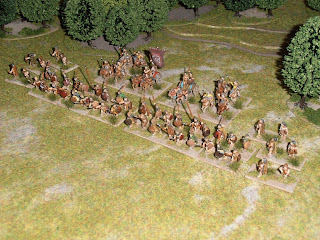