During the last decade of Iqshidid rule (935 – 969 AD) financial constraints had reduced the number and quality of the army guarding the northern frontier of Syria (al-Sham). By contrast, the Byzantine army experienced a resurgence under the guidance of their future emperor, Nicephorus Phocas. These reforms included the implementation of new formations and weapons, a revision of tactics for both foot and mounted troops and rigorously honed by constant training and drills.


The Iqshidid Egyptians deployed their battle line with spear and sword armed infantry in centre with light troop holding the rocky ground on both flanks. Ghulam cavalry were positioned behind in support and on the far right, the Bedouin light horse. In contrast, the Byzantine positioned all their cavalry as its main battle with the Klibanophoroi taking a central position. Both kavaillaroi wings were supported by an equal number of skoutatoi. 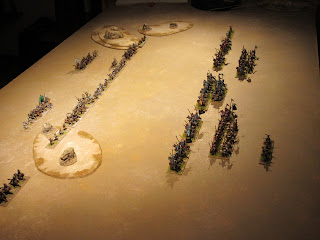 The Egyptians opened battle by bringing forward their skirmish line on the right. The Byzantine replied by moving their own psiloi on the right and brought forward in echelon the kavaillaroi and Klibanophoroi. 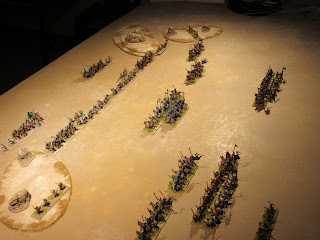 The Byzantine kavaillaroi charged first followed by the Klibanophoroi. The Egyptian line buckled but held. Both sides lost casualties, but the Byzantine were gaining ground. To quicken the pace, the skoutatoi supporting the right wing were moved forward. 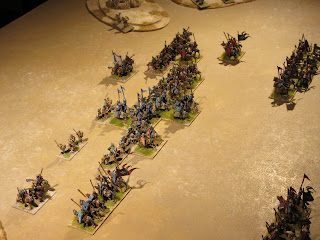 The supporting skoutatoi was fortuitous as the loss of a few kavaillaroi now exposed the Ghulam cavalry to a withering fire. A constant shower of arrows sent enemy cavalry scrambling safety. 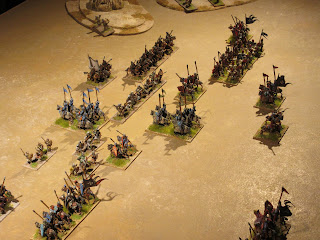 Keeping the initiative, the Strategos reformed his kavaillaroi for the final phase and moved forward the skoutatoi on the left flank. The situation was now desperate for the Egyptians as Byzantine skoutatoi loosed their arrows with devastating effect on both infantry and remnant units of cavalry. finally sending the Egyptians in rout. 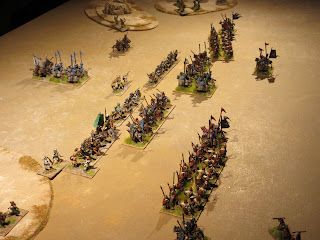 Game two
Pursuing the Egyptians further south, the Strategos found the enemy prepared for battle. This time the cavalry took a centre position with infantry forming on either flank. The Byzantine deployed in standard formation, but due to the constricting nature of the terrain kept units close together. To match the enemy line, the Rus and psiloi were positioned on the far left using the rocky ground for cover. 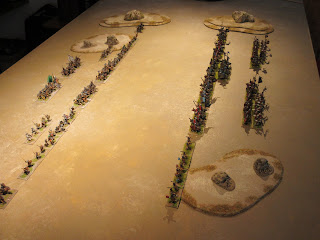 The charge of the Byzantine kavaillaroi and Klibanophoroi shattered the first line of Ghulam cavalry. Reforming the kavaillaroi allowed the skoutatoi time to take up their new position to support their next charge. Further to the right of the Byzantine line, other kavaillaroi pursued enemy light troops into the rocky ground eventually cutting most down. 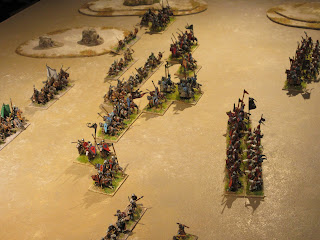 Harassed by archery fire the Egyptian foot on the right made several attempts to close with the skoutatoi. Unfortunately, their effort was in vain as the deafening sound of a thousand hooves could be heard signalling the end. 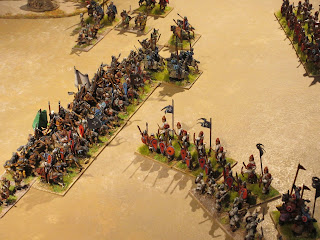 The Nikephorian Byzantine continue this series with battles planned against the Dynastic Bedouin (Emirate of Aleppo) and the Fatamid Egyptian. 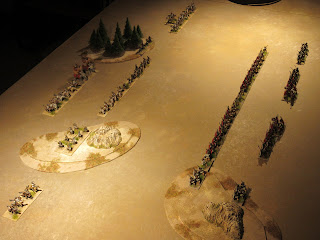 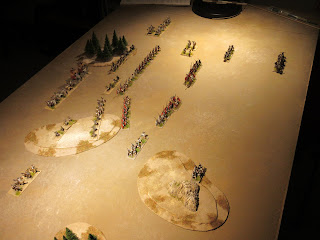 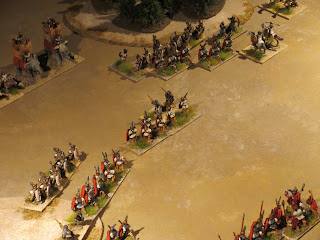 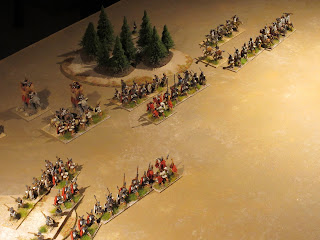 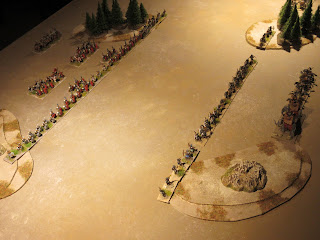 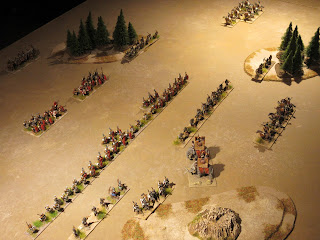 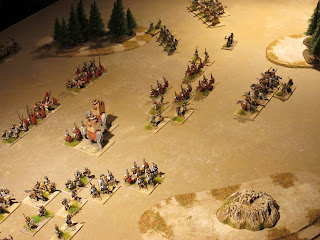 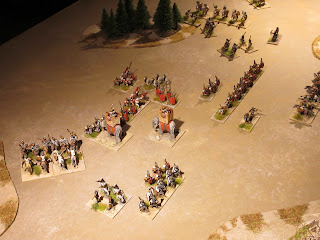 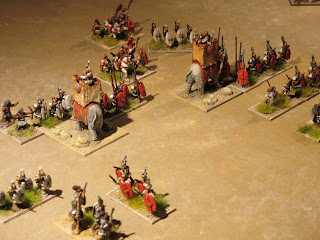 Posted by Timurilank at 02:59 No comments: