Battle of Hingston Down 838 AD

The Battle of Ellendun marked the decline of Mercian hegemony over Wessex and taking advantage of the opportunity, King Egbert sought to expand his lands. In the decade following, Wessex borders moved closer to East Anglia and northward, resuming its conflict with Mercia.

In the southwest however, Egbert encountered a setback against Danish raiders at Carhampton in 836. Recovering later, Egbert would defeat the Vikings and their “West Welsh” allies, a term used to describe the British peoples of Cornwall, at Hingston Down.

The location of the battlefield remains unknown; however, Viking longships could easily find shelter along the river Tamar, in close proximity to the downs near Hingston. The area is also described as wooded and the rounded grass-covered hills offering hilly terrain known as downs. For game purposes, exchange the difficult hills required for gentle ones (maximum 3) and add two woods. A figure outlined in chalk, such as a long-legged horse or Hercules with a big stick, would add ambience to the board.

Both sides battle lines were evenly matched, yet Wessex, advancing forward, were inconvenienced by woods on the right, formed two columns. The Cornish troops encountered no such obstacle as they advanced cautiously forward creating a gap with their Viking allies. The battle developed quickly on both flanks with the Vikings earning their pay, making quick work of the Saxons to their front. The Cornish left was less fortunate, as Saxons drove a deep wedge in their line. Shortly after, the centre of both armies made contact. The Vikings having accomplished their task and remained at their position to see the Cornish army flee the field. A glorious Saxon victory (4 – 2) over the West Welsh and their Viking allies. 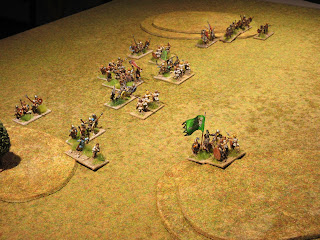