The Battle of Ellendun 825 AD

During the early 9th century, Mercia still held a hegemony over several realms in southern England. Beornwulf deposed Ceolwulf I in 823 seizing control of Mercia and began strengthen control over the southern lands. Marshalling an army, he marched first against the West Saxons eventually meeting them at Ellendun, near present day Swindon. The battle that ensued ended in disaster for Beornwulf, the consequence of which saw a number of kingdoms switching their allegiance to the West Saxons.

Both armies use the III/24 list with a minor difference. Mercia invades Wessex forcing Ecgberht to cut short his campaign in Dumnonia. To meet the Mercian army. Eadberht calls to arms the greater fyrd (use at least 1 x 7Hd).

The location of the battlefield remains contested, some sources placing it near Swindon, others, close to Wilton or Wroughton. Swindon began as a Roman settlement near the junction of two Roman roads. From the early 5th to the 8th century, this area has seen a number of battles leading one to believe this a disputed area between the kingdoms of Mercia and Wessex.

For game purposes, the board would have the following terrain pieces; a filed, a gentle hill, a wood and scrub. No road.

An early autumn morning, both armies formed their battle lines to near identical length, behind the Wessex line, the greater fyrd could be seen positioned on a hill behind their right flank. The battle began slowly as both sides moved cautiously forward; the steady advance broken only with Wessex skirmishers moving further ahead to threaten the Mercian right. Battle lines swayed to and fro with neither side gaining an advantage. This continued for three-quarters of an hour (3 turns). Advancing too far forward, Mercian hird were cut down by superior numbers exposing a gap in their line. 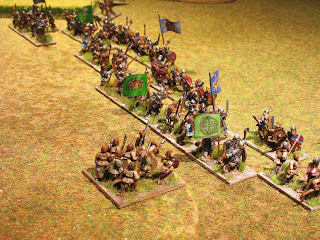 The gap, further widen separating the Mercian left flank from the centre spreading alarm among their ranks. Sensing a disaster, Beornwulf called for a general retreat. The chronicles would record this victory (4 - 0) as a turning point for Wessex. A 4-0 result is unusual for two identically formed armies. This called for a re-match with sides deploying over terrain moved a quarter turn. 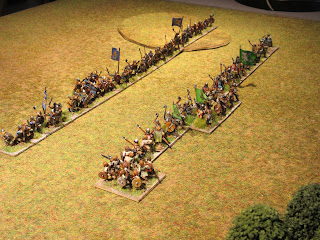 The battle turns quickly in favour for Wessex, driving the Mercian right back to hopefully create a breach of their line. 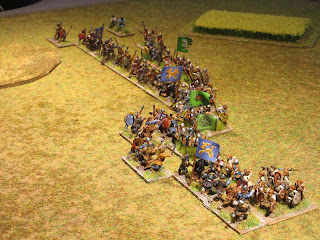 A breach did develop, but not where Wessex expected. Mercia capitalised on their good fortune, but at some cost. A Mercian victory 4+hd - 2. 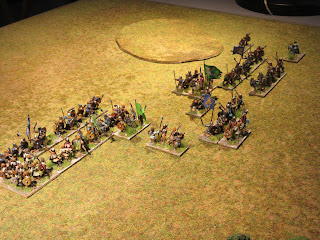