During his early reign, King Offa of Mercia, was beset by constant incursions by a number of Welsh kingdoms, Brycheiniog, Gwent and Powys being the most aggressive. The Battle of Hereford, fought in 760, is noted briefly in the Annales Cambriae (Annals of Wales) as a major engagement involving all three kingdoms against the Mercians led by King Offa. Later sources describe the Welsh victory significant, as it “freed themselves from the influence of the Anglo-Saxons”.

From the map coordinates given for the battle, Hereford is in close proximity to a ford over the river Wye. The settlement, suggested by one source, would become fortified as a result of the battle, therefore the hamlet of Hereford should be open. Terrain pieces to be placed, the River Wye, BUA (hamlet), difficult hill and wood.

Re fighting the battle

Both battle-lines formed three groups, for the Welsh, Gwent and Powys formed on the flanks of main force from Brycheiniog and similarly, the core of the Mercian army led by King Offa were supported by the powerful lords within the realm. 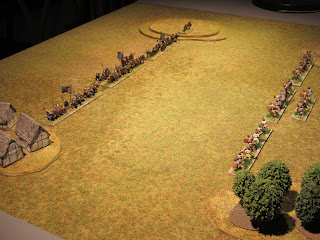 As the armies advanced, the Welsh proceeded to overwhelm the Saxons on the left causing a near collapse of that wing. To their surprise, the attack on the Saxon centre was repelled. 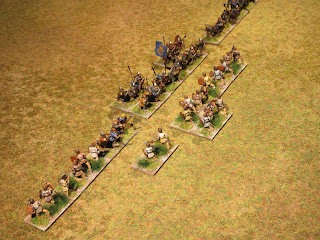 Despite the chaos on their right, the Saxon centre recovered and were able to maul the Welsh to their front to reach a narrow victory, 3 – 3g.

Details of the actual battle, such as size and deployment are sketchy, a second battle was played and reversed the deployment areas for each army, leaving Hereford in possession of the Welsh. The Saxon approach to Hereford was not well timed as gaps appeared as they approached the Welsh position. 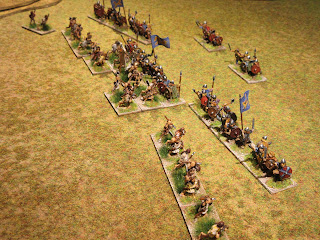 The Saxon centre, led by Offa, struck the Welsh centre sending their king back. Unfortunately, the Saxon support elements were less successful leaving an exposed Offa to be quickly surrounded. 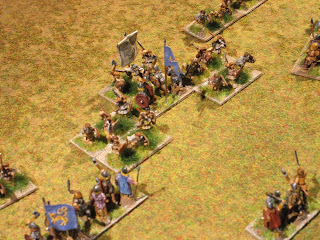 King Offa survived the assault as Saxon reserves quickly moved to aid their king, leaving Offa to renew his fury against the Welsh king. This continued for a time, sending the Welsh king recoiling, while laughing and yelling “Fool, look behind you”. Cautiously turning to look behind, Offa saw the Saxon centre gone. A Welsh victory, 4 – 0. 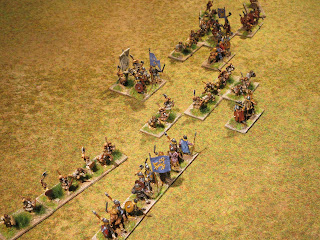