In 797 AD, King Coenwulf of Mercia seeks to re-assert his domination of Gwynedd. In his defense, King Caradog gathers his Welsh forces which include those of Powys and Dyfed. The battle proves to be indecisive as both forces meet again the following year in Snowdonia.

The Ordnance Survey map of 1871 sites the battle in a field to the North West of Rhuddlan. This location is described as marshland bordering the river Clwyd to the east and by steep hills to the west. Our battlefield will have two difficult hills on one side and two boggy grounds placed facing each deployment area.

Welsh: III/19a, an option, represent Powys and Dyfed as allies of two elements each.

From EBKHistorical Chronology of the Early British Kingdoms.

Due to the limited amount of open ground, King Coenwulf reinforced his flanks with extra troops; these would fend off Welsh flanking attempts as he pushed his line forward. The Welsh line was noticeably broken by the boggy ground offering an opportunity for the Mercians to destroy one flank. 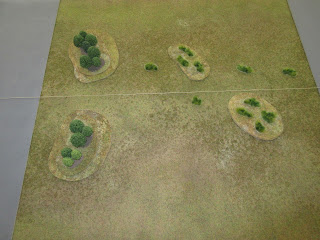 Both armies marched cautiously forward and sensing some confusion on the Mercian side, King Caradog quickened the pace of his left. 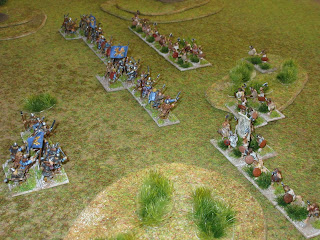 As the main battle lines clashed, King Caradog deployed Welsh skirmishers to harass the Mercian right while wheeling his own bodyguard to turn the Mercian line. 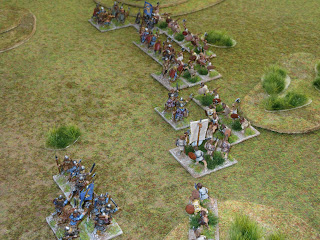 The battle quickly cascaded into a slaughter as King Coenwulf fell as did other thegns of Mercia sending a tremor of despair among their ranks. Further losses incurred by Mercia forced them to flee the field. Welsh losses were insignificant (3g-1).

Each subsequent test, the Welsh proved tenacious winning the majority of their battles with the Mercian commander thrice succumbing to a Welsh axe. Other Dark Age battles will follow.