The campaign that never happened

Following the Battle of Utus 447, Attila withdrew from Rome eastern territories to replenish his army and plan his next campaign. In 450, one such plan was an attack on the Visigoth kingdom of Toulouse. Unfortunately, circumstances forced a change of plan prompting Attila to meet Rome the following year on the Catalaunian Plain.

This particular scenario presumes Attila does fulfil his original plan to invade the kingdom of Toulouse and Honoria, playing the dutiful sister of Valentinian, to accept her betrothal to a Roman senator.

The kingdom of Toulouse

Theodoric I had succeeded King Wallia in 418 and would lead the Visigoths against Attila together with one or both of his sons; Thorismund or Theodoric. Although allies are listed for the Later Visigoths, these enter into an alliance at a much later date, leaving the Visigoths to fare for themselves. The Suevi have migrated to Spain decades ago and the Burgundian were occupied elsewhere leaving the Visigoths with the personal bucellarii of the higher-ranking nobles, the gardingi and a mass of spearmen supported by archers. These would meet Attila’s army, essentially of similar composition to that used at Utus, near Toulouse.

We then have the following:

The Huns have a scouting advantage allowing them to place the terrain pieces, after each die cast for quadrant by the Visigothic player. Terrain pieces selected are; one BUA (hamlet), one gentle hill and two wooded hills.

The Visigothic army are caught on the open plain and prepare for battle with spearmen forming a centre, cavalry is positioned on the flanks and the commanders and their bucellarii form a reserve. 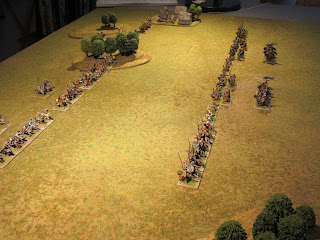 Advancing in right echelon, the Visigothic infantry had the support of light troops and the Gardingi. The latter would strike the Hunnic line first. 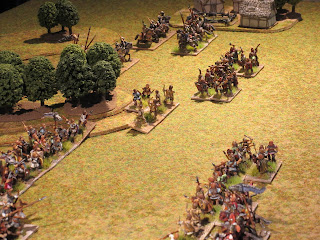 The Huns showered the approaching enemy with arrows and those facing the Gardingi threat feigned a retreat to a position on a hill to their rear. Both, the columns of spearmen and the Gardingi were faced with the question to continue their advance. In the centre, the subject tribes and Gepid lancers crashed into the Visigoth line with both sides incurred heavy casualties. 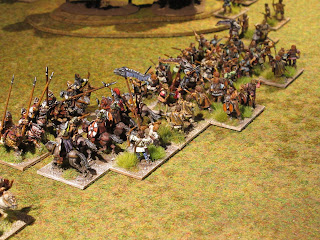 As the centre became fully engaged Attila sensed the moment was right to overwhelm the Visigothic left flank. Reserve Hunnic cavalry had skirted the battlefield to outflank the enemy line launched their attack. Seeing this, Attila launched a general assault to create a cauldron of death. Out maneuvered and outnumbered, the Visigothic left collapsed, leaving their king to call for a general retreat to Toulouse. Score Huns 8 – 4. 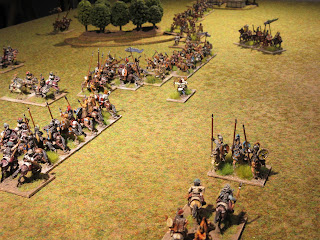 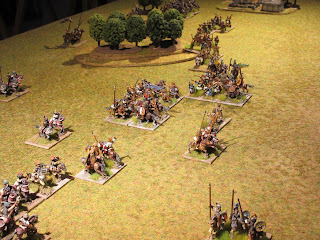 A convincing Hunnic victory, but this begged the question, could the Visigoths have won by deploying differently? Game two used the same placement of terrain, this time the Visigoths deployed in two lines, the first comprised all the infantry with the Visigothic cavalry positioned in a second line to deal with the expected Hunnic flank attacks, like Alexander and the Scythian.

The battle’s opening followed a similar pattern, however this time, the Hunnic assault on the Visigothic left met with greater resistance. 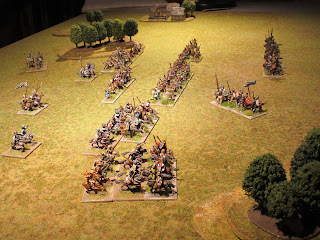 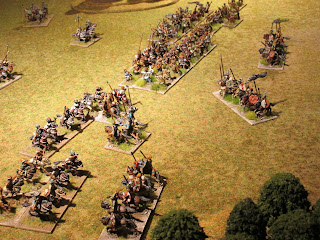 Casualties mounted heavily on both sides as the Huns were foiled at every turn. Attila was forced to bring Hunnic cavalry from the left to support the right. Unperturbed by the losses incurred among the subject troops, Attila gambled on the Huns to turn the battle. After a long fight, this they did and secured an 8 – 6 victory for Attila. 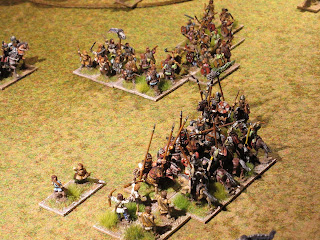 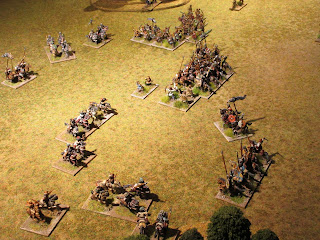 All Hunnic losses fell exclusively among the subject tribes and Gepid lancers.