Both the Late Medieval and Renaissance collections have grown with the addition of Polish, Lithuanian, Muscovite and Tartar armies. Their battles have been for the most part seen the usual forests, swamps, rivers, tracks and gentle hills. Lacking proper buildings or structures for hamlets were lacking until now.

The plan was to construct a rural hamlet with buildings similar to log cabins with thatched roofs.

The construction followed the same pattern as with other projects, a foam core shaped and glued to a 30mm x 40mm base, then in stages, covered with Milliput. 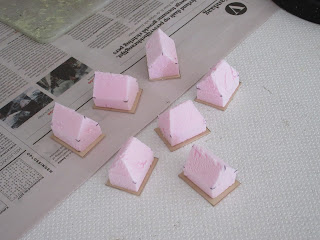 I worked with a few structures at a time as scoring the log walls would be time consuming, allowing time for each stage to harden, all seven pieces were done in less than three hours over the course of a day.

One feature remained and this were details to complete the log cabin look. Thinly rolled Milliput was placed at each corner, then scored to simulate the log ends. The initial attempt was messy, but subsequent pieces took less time and effort. 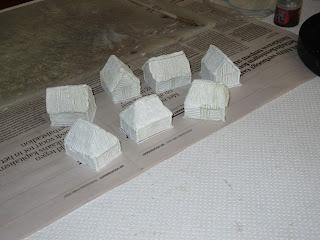 After undercoating, the walls were painted first, later highlighted with a thin coat of mid-grey. The effect was similar to the palisades done for the Goblin encampment. Tips were given a thin coat of flesh.

A church was intended as part of the hamlet, but I blundered its construction omitting the small tower or belfry before applying Milliput. Too late and so the structure was modified as a barn. 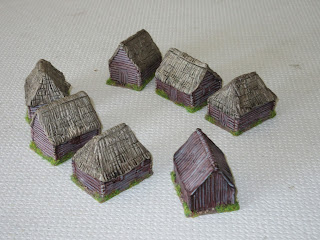