The Battle of Utus was one of a series of Late Roman scenarios that appeared at the blog in January of 2017. Sources give Attila the victory, however a number of modern historians are of the opinion the battle was indecisive with both sides experiencing heavy losses. Follow the link to find the original battle report of 2017.

Since 2017, there have been a number of interesting ideas exchanged at the DBA Fanaticus Forum making a replay of the battle worthwhile. Scouting advantage has been suggested and how this should influence terrain advantage, further, psiloi ignoring enemy side support, a similar idea was suggested for LH and lastly, command size.

The Huns are invading and have scouting advantage. Rome as the defender still casts a die for quadrant placement, but the Hunnic player positions the individual terrain pieces. Choice of board side remains with the invader.

The test games are played with 24 elements which allows the use of a larger board; optional terrain pieces are increased by one. Selected for the tests, one BUA, two wood, a wooded hill and road. As you will see from the previous battle, the positioning of the terrain is somewhat different. 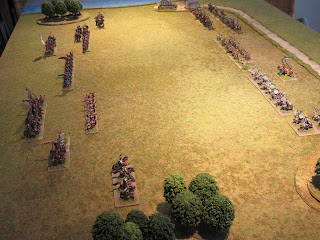 Rome deployed its infantry in the front line, on its extreme flanks, the equites sagittarii were positioned. Clibanarii and other heavy cavalry formed a reserve, these were positioned behind the auxilia on both flanks. Facing Rome, the Huns placed their subject levies in centre with an equal number of cavalry to either flank.

The battle opened with the Huns probing both Roman flanks searching for weaknesses. Responding, Rome attacked the Hunnic cavalry on their right by advancing the auxilia and supporting cavalry forward. On the Roman left, all units awaited the expected Hunnic assault and did not stir from their original position.

In rapid tempo, the engagement on the Roman right developed into a full-scale cavalry battle with the Huns suffering more casualties. 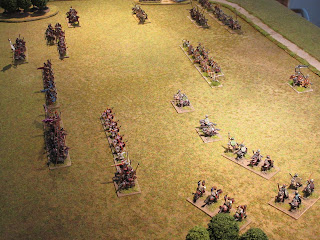 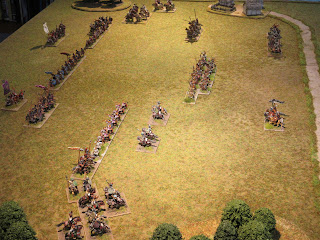 The Hunnic threat to the left flank did not materialise as the legions made short work of the subject tribes in centre to seal a decisive victory. Final score, Rome 8 – 1. 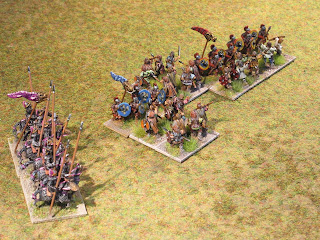 Not quite the result I had expected. Nonetheless, the scouting advantage and terrain placement worked to the Huns advantage, so did the combat change for LH. Ignoring enemy side support in close combat did prolonged their engagements by an extra turn. The decisive victory was due for the most part by an abnormal number of ‘twice as many’ results for Rome sealing the Hunnic demise.

A second game was called for which used the same terrain and troop deployment.

An invigorated Rome advanced its right and centre toward the Hunnic line and the Huns responded with a similar plan. The signal difference being the entire first line of Hunnic light cavalry on the left to support the main effort on the right flank. As the dust cloud dispersed exposing a second line of Hunnic cavalry, Rome continued its advance against the right flank. 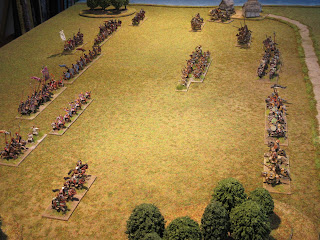 Both flanks were now heavily engaged leaving the centres of both forces to yet make contact. 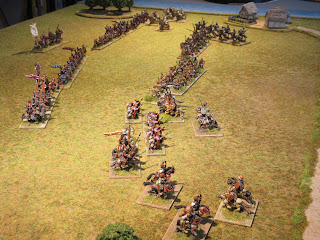 Rome’s left flank were greatly disadvantaged by the successive waves of light horse and Gepid lancers. Both Attila and his subordinate were in the thick of the fray, each inspiring their respective commands. 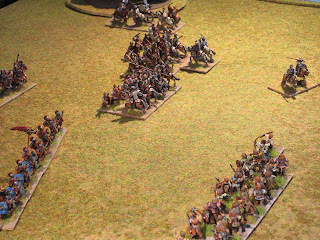 Despite Rome gaining ground on the right flank, the left flank collapsed under the weight of the Hunnic horde. The treat to Rome’s centre became evident as were the total casualties suffered, the Magister Militum called for a retreat. Final score, the Huns 9 – 5. 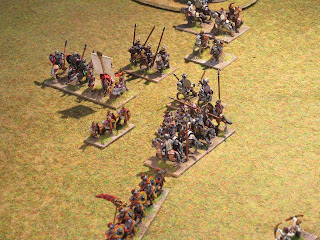 Losses for the Huns fell mostly on the light horse as the subject troops did not engage; nonetheless, making use of their mobility turned the battle quickly in their favour. The battle did have its moments; the Huns had the advantage with a score of 6 – 2 by turn six, Rome caught their wind, Rome brings the score near level at 6 -5. In the end, the Huns needed an extra three turns to reach victory.