The Goblin/Orc encampment was an experiment to prove if circular structures were practicable to construct. If so, then the few steppe armies in the collection could then have their dwellings.

Pink foam, shaped and glued to 30mm round bases, served as a core for each dwelling. Working with three pieces at a time, the walls were covered, then the supports, doorway and stitching were scored while the Milliput remained soft. Dong the walls first, the piece can be easily be rotated between forefinger and thumb while scoring.

The walls took about three hours to harden (Silver Milliput) allowing a safe handling of each piece while adding a roof. Painting the huts followed the same style as those pictured in the Warhammer Orcs & Goblins book of 2000. Dark green base coat followed with a light shade of green, dry brushed. Exposed bits of base were covered with a sand mix, painted and sparsely covered with grass.

The walls are placed on 40mm x 15mm bases and covered with Milliput, formed an embankment to hold the cocktail sticks serving as a palisade. The palisade is later painted dark brown, dry brushed grey to appear aged and covered with sand and sparingly, some grass.

Viewing the photos, the encampment could use a few gate pieces and a central altar covered with trophies. This have been added to the list. 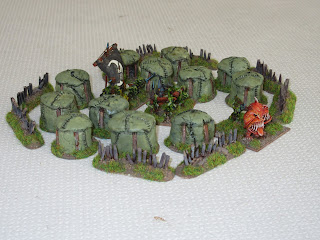 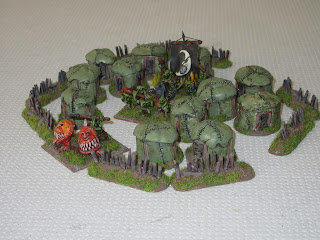