Following their victory at Civitate in 1053, the Normans turned their efforts toward Byzantine and Lombard holdings in Apulia, Calabria and Campania. These would eventually become the Duchy of Apulia ruled by Robert de Hauteville or better known as Guiscard. Together with his brother Roger de Hauteville, the way now lay open for a campaign across the Straits of Messina.

Ousting the Byzantines in 830, the Aghlabids gained control of Sicily, they were later displaced by the Fatamid juggernaut. The Kalbid dynasty ruled as vassals of the Fatamids until the last emir’s death in 1052 creating a political void later evolving to a civil war among the Muslim entities. the Christian population on the island appealed to the pope for assistance and to resolve this, the pope named Robert de Hauteville, Duke of Sicily. Not having control on the island, Robert and Roger did not turn down the opportunity to invade the island. Fortuna further smiled on their venture as Ibn al-Timnah, emir of the eastern territories called on the help of the Normans.

A successful foray in 1060, both de Hauteville brothers formed a new expedition using Messina as a base of operation. Robert returned to Italy to suppress a revolt, leaving Roger to continue the advance inland. Ibn al-Timnah joined the Norman force with his army and together they marched on the bastion near Enna, held by Ibn al-Hawas. Refusing to leave his fortifications, the Normans laid waste to surrounding countryside. This had the desired effect, as al-Hawas left the protection of his fortress to deploy for an open battle.

The composition of the Muslim army uses the Fatamid army list, while this is not certain, one could easily use the North African and Sicilian list for this battle. The Normans and Fatamid are listed as enemies of one another, Sicily would seem the most logical location for their confrontation.

The Norman battle line was hampered by woods effectively dividing their line in two. To face this, the Fatamid deployed their army in two lines, the first held the cavalry with infantry forming behind. Seeing the Norman advance, Fatamid cavalry made a tactical retreat to a position behind the infantry. 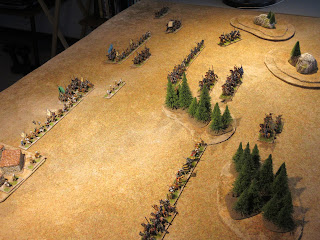 Unfazed, the Normans continued their advance keeping pace with the dismounted knights to their right. 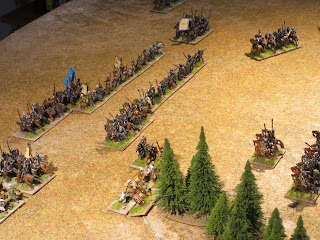 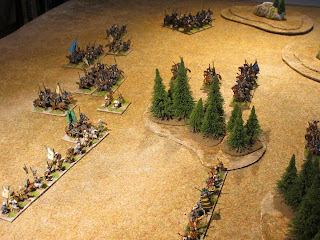 To determine if the victory was an accident, a second battle was done using the same the same pieces to generate a different battlefield.

Terrain no longer hindered the Norman deployment and both armies placed their infantry in centre with cavalry and light troops positioned on each wing. 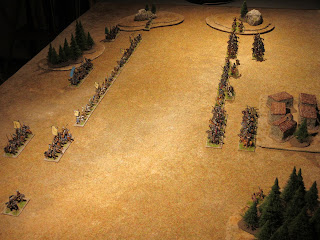 The Fatamid rapidly closed the gap between the centre and on the Fatamid right, Ghulam cavalry caught Norman cavalry positioned in front of the village. These became the target of the Armenian archers bringing both lines of Norman cavalry into disarray. 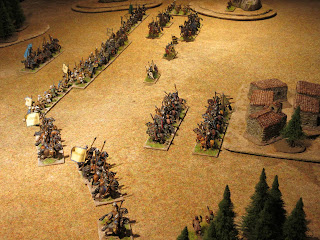 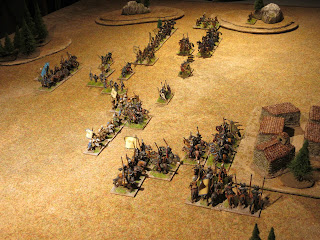 This led to disaster from which the Norman milites could not recover. Losing control over the battle, the decision was made to retreat leaving the field to the Fatamid. Score Fatamid 10 – 6. Both armies deployed in a similar manner as before, with one exception, the Norman left was positioned further back. 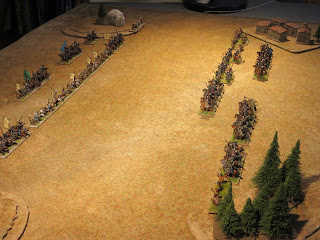 This time, the Normans advanced in echelon with the dismounted knights leading. To negate any possible threat on the right, Sicilian Greeks held Fatamid light troops in check. As the lines struck, small gaps appeared in the Fatamid line, which were filled from the reserves. 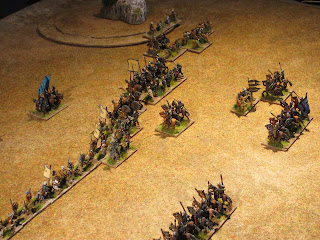 In less than an hour (4 turns), Fatamid casualties fell rapidly to Norman knights on foot, no longer were there Fatamid to be seen. This left Norman troops on the right to turn on the enemy centre forcing the Fatamid command to call for a general retreat. Score Norman 9 - 2 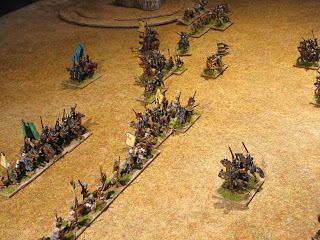