The Battle of Gavere – the refight

All three tests used the standard DBA3 lists for Low Countries IV/57c and Early Burgundian IV/76, but doubled the number of elements for each single command. Readers are referred to blog post of 14 October 2019 for details of the double size command. Four (7Hd) are substituted for Low Countries pikemen (4Pk) to represent the recent additions to the rebel army.

Game one followed the flow of the actual battle beginning with an artillery bombardment before pike columns set off toward the Burgundian line. In response, Burgundian archers and crossbowmen moved forward and disrupted their line, but this did not deter the rebels any. Burgundian success against the rebel right was matched by and equal success on the opposite flank leaving the rebel centre to deal the decisive blow. A tightly fought battle lasting eleven turns resulting in a victory for Ghent (8+3Hd - 10). 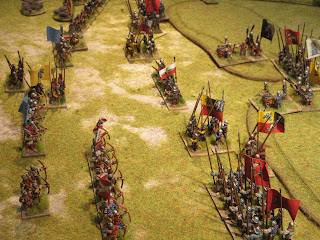 Game two, replaced the artillery bombardment with a rapid assault by the rebel pike columns. The Burgundians. deployed in a similar manner as before, were scrambling to repel the pike columns, some managed to reach the Burgundian reserve formations. Hidden from view, the Burgundian cavalry did charge the rebel left creating casualties, but not enough to stem the tide battle. The Flemings fought like Swiss earning a 3 – 8 victory. 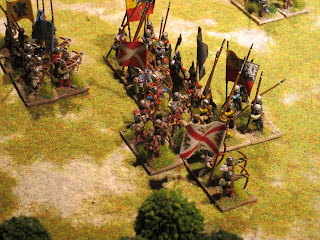 Game three, but for the repositioning of the artillery both armies retained their standard deployment. Both Burgundian wings advance while shooting effectively breaking up the orderly march of the rebel pike columns. 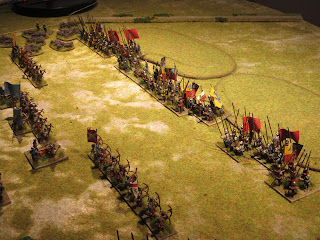 The veteran Flemish were undeterred and continued their advance leaving the militia pike to redress their line. 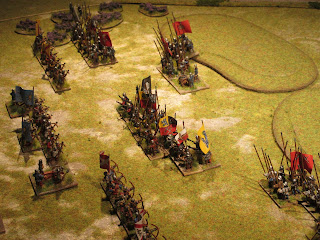 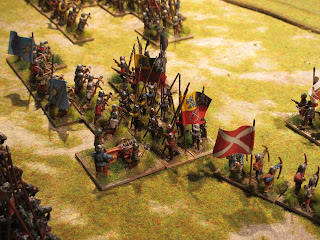 Rolling up the rebel left wing with effect, the Burgundian cavalry set their eyes on the rebel centre. At the Burgundian centre, the situation became critical as Philip committed his guard to hold off repeated attacks by rebel pike columns. This proved frustrating as repeated counter attacks had little effect. 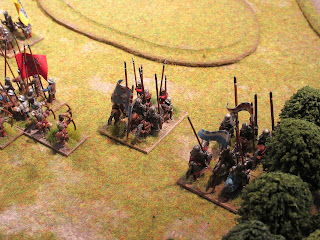 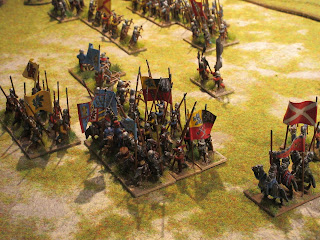 Both sides suffered greatly, but the Burgundian centre held. Further afield, shoots were heard signalling a rebel resurgence on the right as pike columns crash into the Burgundian crossbowmen, sending them recoiling. Failing to break the Burgundian line, the pikemen were now spent. The rebel left now gone and both centre and right exhausted, troops began leaving the field and hopefully reach the walls of Ghent (8+Hd – 6).

In reality, all three games were evenly matched, yet an overdose of confidence undermined Burgundian success in game one, grim determination to win no matter what the cost delivered a second victory for the rebels and lastly, developing a workman like approach served the Burgundians well to earn their victory.

History records the fight lasted two hours before the powder kegs behind rebel position were accidentally set off. The enormous eruption sent rebel troops into a panic which the Burgundians took advantage off and escorted the rebels off the field. It seems unlikely that such an event should occur in every game, but players may wish to add this as an event card or die cast.