The Lithuanian are ready for use consisting of four heavy cavalry, six light horse and two foot archer elements. An order with Legio Heroica was placed recently to add more light horse and foot archers, but for the moment these will do nicely for the planned historical scenarios.

The heavy cavalry are a mix of Legio Heroica bow and lance armed figures with diverse shields from Essex. Shields are described in Ian Heath’s Armies of the Middle Ages, vol.2 as mostly red colour and I realise many modern representations have emblems painted on them, but decided against this as there would be a good number of banners to identify them as Lithuanian. The light horse are bow armed Turcoman figures with fur caps added with Milliput.

The flags like others made are interchangeable, so elements may crop up elsewhere as allies or morph into another army as the collection is meant for the later part of the 15th century. The description of flags is difficult to find, but the Columns of Gediminas and the Vytis are the most seen. Vytis, usually depicted with a sword, but a manuscript dated 1422 shows him with a spear which looked better. Despite the repetition of flags and banners in red colour, the different shapes should add some variety to their general appearance. 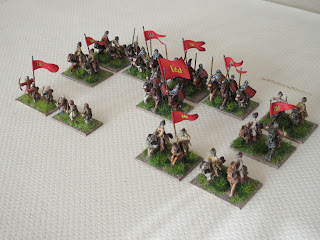 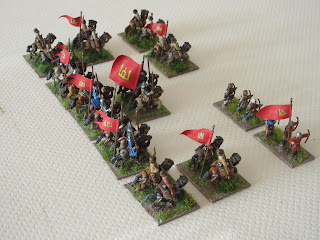