I have decided to set aside the 'Migration to Kingdom' project for the moment and do a series of historical match ups using the newly completed early Byzantine army. I expect these will require a learning curve as they are predominately cavalry with a small support group of infantry.

Their opponents will include all those listed for III/4a with the exception of the Southern Slavs, so this will generate nine matches totalling 27 games.

Game 1
Nomad Arab deployed in the depression between two difficult hills. The Byzantine lines were broken by the rough ground and sand dunes that spotted their deployment area. 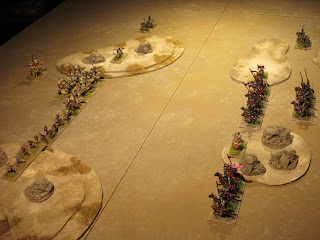 Throwing caution to the wind, the Byzantine cavalry struck first followed by the supporting left wing and the infantry. This had the desired effect breaking the nomad line into smaller groups that were easily picked off by supporting troops. Score 5 – 1 E. Byzantine. 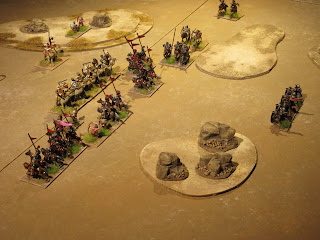 Game 2
Both sides made adjustments to their tactical plans. The nomad would adjust the number of terrain items so as to work to their advantage and the Byzantine would use their speed of manoeuvre to encircle the nomad horde. 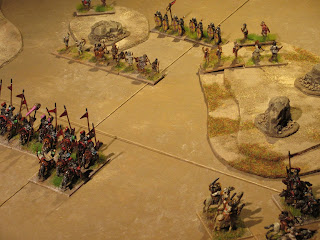 The Byzantine made use of the rough ground and difficult hill to position their infantry while all the cavalry formed up on the left flank. The nomad concentrated their infantry in centre and positioned their mounted troops evenly on both flanks.

The attempt to hold back the Byzantine encircling manoeuvre failed as the main column slipped between the two active melees. Forming line, the Byzantine cavalry swept the nomad reserve taking out their chieftain. Bereft of their command, the nomad infantry were cut down bringing an end to a hard won battle. Score 4g – 3 E. Byzantine. 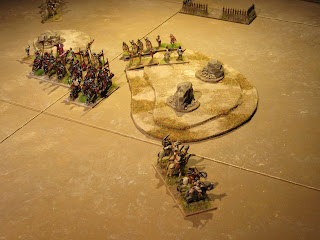 Game 3
Neither side were hampered by the rough terrain and deployed in their standard formation; a Byzantine cavalry line supported by infantry facing an Arab infantry centre flanked by two wings of mounted troops. 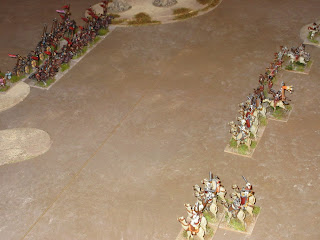 The battle turned into a brutal slugging match with each side matching the other’s score. The lines became thinner exposing a flank or two and seized as an advantage by the opponent. In four or five turns, the battle was over; Score 4 – 3 Nomad Arab. 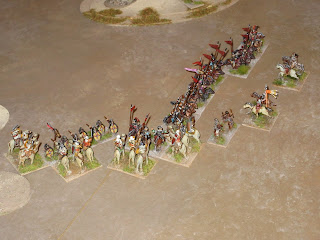 Changing the terrain items did help the Arab in games two and three as this placed the sand dunes as a dominant feature on the battlefield. The Byzantine cavalry reigned supreme when they could manoeuvre and utilise their advantage of speed; however, forced into a slugging match they did not always do well.
Posted by Timurilank at 00:10