During the winter months of January and February Constantine III was able to increase his reserve of activity points. By springtime (March), Constantine III marched an advance force under Gerontius to secure the Alpine passes. He further offered an interesting proposal to the Suevi chieftains; namely ensuring a safe passage to Maxima Sequanorum in southern Gallia; a tempting offer that would be considered by the tribal council. 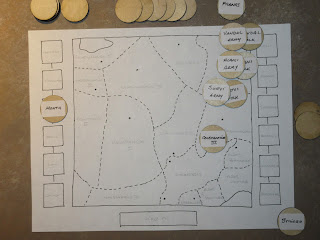 April, Stilicho’s advance forces lead by Sarus {1} had breached the Alpine pass and would meet Constantine III’s troops. The confrontation the following month (May) left both armies bloodied (4 – 3) but Sarus held the field at the end of the day. Awaiting further orders both sides used the following month to recover their strength. A build up of activity (and points) within the barbarian camps did not go unnoticed. 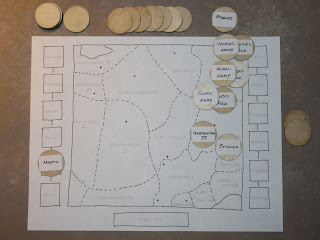 Fresh orders arrived in July and Sarus resumed the conflict against Gerontius. Unconcerned as to the outcome of the engagement, the Vandal and Alan armies with their people moved into Belgica II. The army of the Suevi moved into Maxima Sequanorum leaving their folk behind in Belgica I. This move was now seen as a threat to both Roman camps. 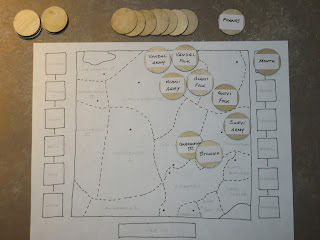 Sarus’ rapid march caught Gerontius in the open and the battle that followed was hotly contested. Shortly after the two armies were locked in combat Alan allies appeared  and struck Sarus’ exposed flank facilitating a decisive victory (4 – 0) for Gerontius.

In August, the Vandal and Alan would continue their march westward while the Suevi held their course southward. The participation of the Alan in the last battle was not lost on Constantine III and diplomatic missions were sent to the three tribes to re-establish the former treaties with a goal toward hastening their journey further west to Hispania or the creation of settlements within Gallia. The death of Stilicho in August brought welcome relief as Honorius lost one of his most able commanders. Sarus was recalled to help stem the Gothic threat to Italian territory.

For the next two months (September – October) no further military operations were conducted as the migrating hordes seemed content to remain in Belgica II. Operations in November would cease until the following spring and Constantius III moved to Lugdunenesis I and winter quarters. 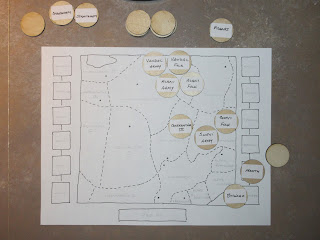 {1} Sarus would march against Gerontius when either player drew a King (any suite). In a two player game, the barbarian player would command the army of Sarus.

Assessment
All barbarian tribes had migrated to an adjacent province giving the barbarian player a taste of victory. Accumulated activity point score for the end of 408 AD is one compare to ten for Constantine III.

The barbarian player was not as fortunate with the cards as the Roman player was. Something to think about - to assist the barbarian hordes, I may revise the movement rule for the barbarian folk and give them a free passage each season to an adjacent province while moving the military counters would still require an activity point.
Posted by Timurilank at 00:21