The flank march has been used as an option in a number of Ancient Rule sets including WRG. Some systems require noting their turn of arrival or determine this by casting a die. Rather than follow this method we approached this from a different perspective and decided to tie the flank march to a player’s pip score as is similarly done to determine if plough is rough going or to cease the sacking of a city.

The player conducting a flank march selects 1 -3 elements of any type (excluding the command element) to be kept off table and notes which board edge they are to appear. This must be outside the opponent’s deployment zone. The player may choose when his flank march arrives but must spend pips for this, however, the score increases by + 1 for each turn they are kept off table.

In the example below, the Gepid player moves forward during his first turn. Casting a PIP score of six on his second turn, the Gepid player brings his flanking column on to the table for 2 PIPs, makes a tactical move + 1. plus an extra + 1 for outside command distance from the general. The Gepid player now has 2 PIPs remaining to use for the main body. 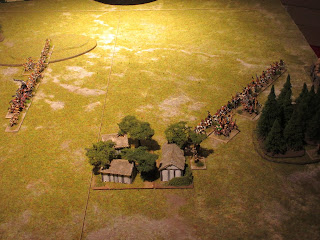 Turn two, the arrival of the flank march column. 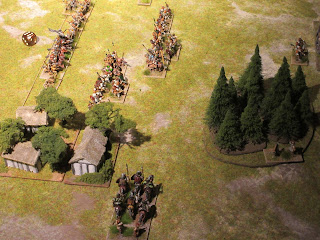