Severan Army vs. the Usurper (West)

The third century AD was a desperate period in Rome’s history as claimants to the throne backed by their legions waged war against other pretenders. This next test series brings two near identical armies to the battlefield with those of the western list labelled the ‘usurper’ agonist the Imperial army of the east.

Game one
The Usurper’s forces (Western) are deployed on the right and on the left, the Imperial or eastern army. 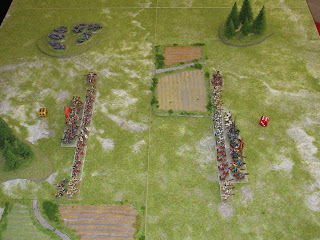 Both sides eager for battle moved steadily forward across the open plain. 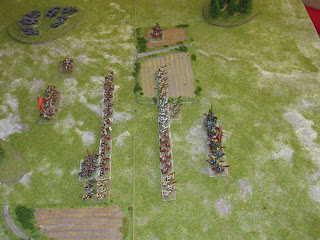 Troops of the east struck first catching the usurper’s right off guard. 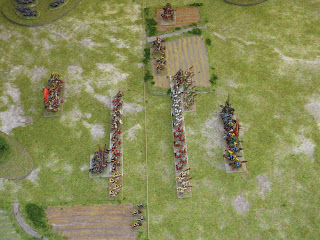 The usurper’s legions were driving back their opposition that the entire line began to pivot on the centre formations. 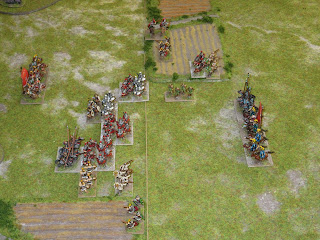 The battle was finally decided by the eastern legions rolling up their opposition including half of the Praetorian Guard. Score 1 – 4 Rome (Eastern).

Game two
The usurper’s forces were augmented by Frankish allies and can be seen lower right in the photo. 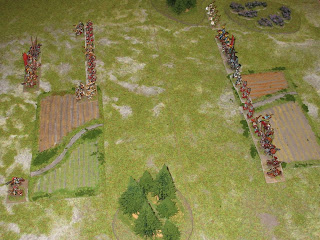 Both battle lines now cleared the muddy fields and would wheel to meet in the dry patches between. 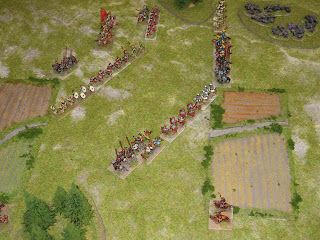 The eastern forces quickly got the upper hand as the Frankish assault became stalled, the Praetorian were destroyed and the usurper’s cavalry were confronting not only the approaching legion but enemy cavalry as well. 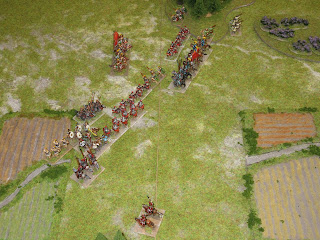 With the loss of the Praetorian the centre was further widened and gaps in the usurper’s line were now appearing elsewhere. Fearing for his life, the usurper called a general retreat, 0 – 4 for Rome (Eastern). 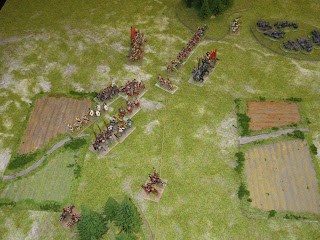 Game three
Avoiding the muddy fields, both sides contracted their formations with the usurper’s Frankish allies formed up on the opposite side of some rough going terrain. 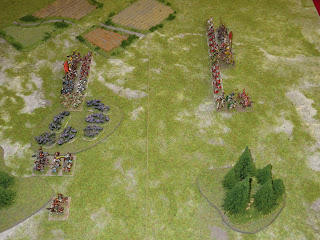 Better drilled (good pip score), the eastern troops wheeled and extended her line to reach the wood on the left in one quick operation. The usurper’s troops were less fortunate as their approach became disjointed. 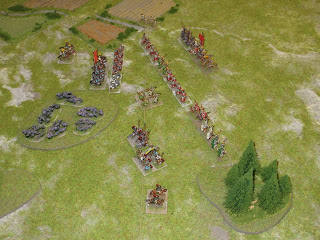 Not all formations were lined up properly, but a gap could be seen to the right of the eastern line as the Franks were now earning their gold. 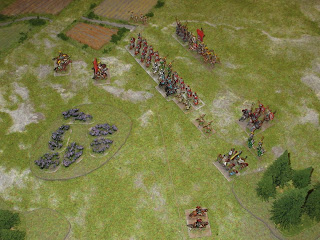 The western tide now became stalled as archery fire was sending the usurper’s cavalry back out of range and his legions were now recoiling under the pressure by the eastern units. This widened the gap between the centre and flanks that the eastern cavalry could be seen swarming over isolated units and sealing the retreat of many western units. Score 2 – 5 Rome (Eastern). 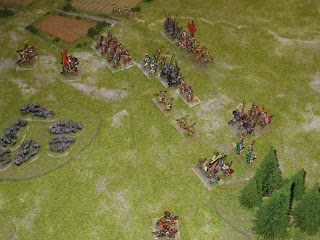