The majority of my Ancient collection are Old Glory 15s , but the Early German are an exception. The Blue Moon Germans are slender, so that accentuates the height somewhat, and the shields are varied enough to give the warband a barbaric look. As the shields are on the large side I opted for the deeper base size suggested by 3.0 and with the extra 5mm depth shields are no longer touching and the extra space allows more terrain to be seen.

These are modeled after the Marcomanni sub-list for the Early Germans. There are two such lists with an early one offering two elements of solid blade which give an extra punch in combat.

To differentiate the three commands the ground colour of the shields are different; black through out, but mixed with dark blue, brown or dark green. Blue Moon packaging have given me extra figures to the number needed for a big battle army, so these have been fleshed out to create another two commands which are now the Quadi (white shields) to serve as allies or enemy of the Marcomanni.

During my research I found a number of interesting discussions of the Early Germans .

From the Total War Center with a number of posts had good references.
http://www.twcenter.net/forums/showthread.php?630716-Germanic-Thread-(Historical-Discussion-and-Info)&highlight=Marcomanni 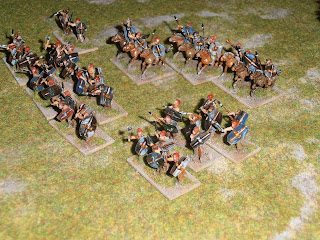 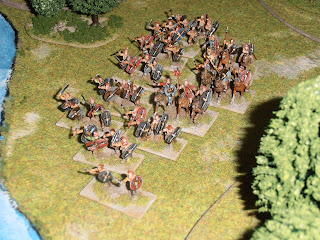 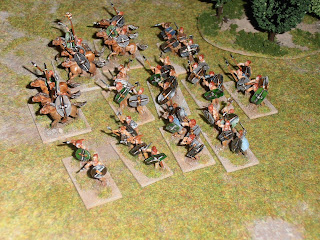 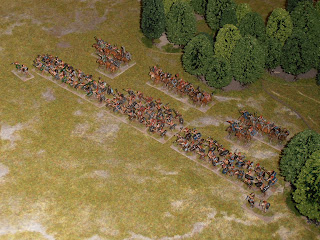 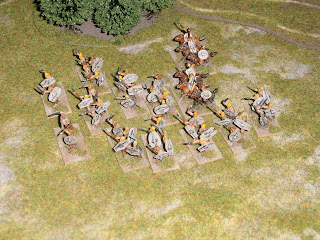 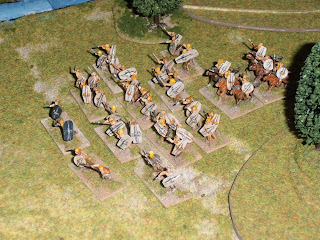 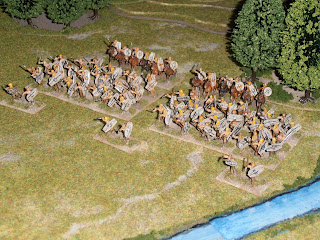