Histria 61 BC, the tests

The DBA3 army lists offer a good starting point for both Roman and Dacian forces. For appearances, the Roman player may wish to substitute Gallic and Numidian units for Macedonian or Greek mercenaries with the remainder of the list working well. The Dacian force should represent a confederation of allied tribes and here the Bastarnae units form an ‘allied contingent’ for movement purposes.

Hybrida is characterised as ‘inept’ and avoid placement on the front line. Placement with the cavalry to form a reserve group at the start of the game was a better option. During battle, cavalry may support the infantry in combat, but move independent of any infantry formations. Although a subtle condition, this should reflect the skittish nature of Hybrida, who had been caught earlier in the campaign in an ambush and barely avoided capture by fleeing with the cavalry.

Two tests were done, one using the standard 12 a side game followed by a second test of two commands for each side. The difference in number of elements coupled with additional turns needed to reach a decision could have a different outcome. As you will read, the second game demonstrated an improvement with die casts balancing out and the extra number of turns providing a tighter game.

The Dacians advances slowly forward offering the Bastarnae time to close on the Roman left flank. Seeing the threat, Roman auxilia and cavalry realign their front to await the Bastarnae attack. With the left secure, the legion to continued their advance. 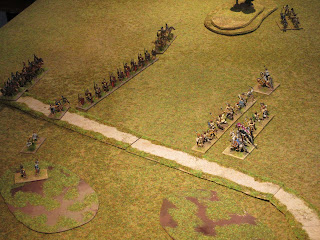 The lines clashed, the legionnaires on the left of centre successfully pushing the enemy back, but the situation immediately becomes desperate as the Roman centre is swept away leaving the Ligurian auxilia horribly exposed. Seeing their demise, Hybrida flees the battlefield, 5 – 1 for the Daci. 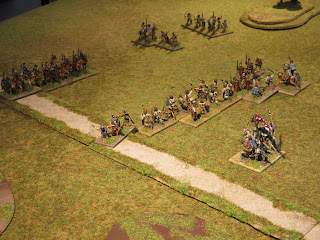 Both sides deployed in a similar manner and with double the number of elements present an imposing appearance. 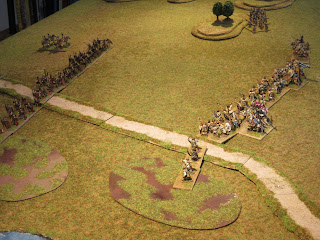 Following a similar strategy, the Bastarnae clear the crest earlier than expected. This proved fortuitous as both Dacian columns and Bastarnae met the Roman line at the same moment. 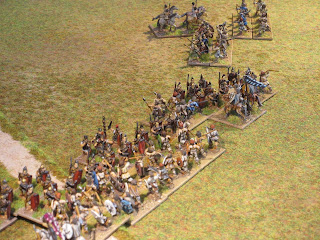 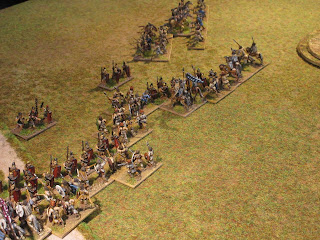 As the battle raged on, Roman resistance began to wane as new gaps appeared soaking up the remainder of the reserve infantry. As yet, the cavalry reserve remained uncommitted as disaster loomed on the Roman left.

The Bastarnae effectively crushed the auxilia and light horse on the left flank while Dacian warriors were breaking through the Roman centre, leaving Hybrida no option but to flee the field again; 8 – 2 for the Dacian. 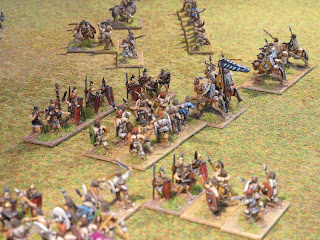 Two tests reached a historical result, which is good. The question remains however, can the Romans actually win this battle. The answer is yes, but that solution is for another time.