A Dacian Conflict with Rome

Information about the battle of Histria 61 BC is very thin. The passage from Roman History, written by Dio offers a start point and additional pieces to the puzzle were found at the website, History Files. The latter, listed the possible tribes that confronted Hybrida and the Digital Atlas of the Roman Empire was found useful in determining a possible battleground. Lastly, our picture of the battle would not complete without a brief biography of Hybrida, here we gain some insight to the general’s character, which may have played a role during the battle.

“In 72–71 BC Marcus Terentius Varro Lucullus became the first Roman commander to march against the Getae. This was done to strike at the western Pontic allies of Mithridates VI, but he had limited success. A decade later, a coalition of Scythians, Getae, Bastarnae and Greek colonists defeated C. Antonius Hybrida at Histria. This victory over the Romans allowed Burebista, the leader of this coalition, to dominate the region for a short period (60–50 BC)”.

From TheHistory Files on the subject of the Bastarnae.

“A varying mixture of Bastarnae, Dardanii, Scordisci, and Thracians have met each Roman campaign with a stubborn resistance. Following one particularly successful encounter for the Balkan tribes in this year, that unity is broken by the Thracian tribe of the Getae, who are known to Rome as the Dacians based upon their general geographical position. In 61 BC the Getae are part of a force that is led by the Bastarnae. Together they inflict a humiliating defeat upon the Roman army of the inept Gaius Antonius Hybrida (uncle to Mark Antony) outside a Greek colony at the mouths of the Danube, at the Battle of Histria. The entire Roman force is massacred, abruptly terminating Roman control of the region”.

“Situated on a peninsula, ancient Histria is about 5 kilometres (3 mi) east of the modern Romanian commune of Istria, on the Dobruja coast. The ancient seashore has since been transformed into the western shore of Sinoe Lake, as the Danube's silt deposits formed a shoal which closed off the ancient coastline. The current Sinoe Lake was at the time the open northern bay, while another bay on the southern shore served as the port. The acropolis with sanctuaries was established on the highest point of the coastal plain. The settlement itself, erected in the 6th century, was 1/2 mile (800 meters) to the west of the acropolis. The settlement had stone paved streets and was protected by strong wall. Water was collected along 12.5 mile (20 km) long aqueducts”. - Histria/Istria - Wiki

With the Digital Atlas of the Roman Empire, we gain a better impression of the Danube delta and the surrounding area of Histria if both topographical and map option are used. Any Roman force approaching the colony of Histria would need to traverse a series of forested covered hills, all ideal locations for an ambuscade. This was not the first time Histria had faced barbarian incursions and searching a few of these added more detail as to the nature of the terrain in the region. https://imperium.ahlfeldt.se/

Hybrida was elected consul in 63 BC alongside Cicero. His dealing with Cicero later gained him the governorship of Macedonia at the end of his term. Hybrida abused his rule as governor, robbing the provincials and invading the neighbouring barbaric lands of Moesia. The natives, in turn, defeated Hybrida on two separate occasions driving him out of their lands. Hybrida was replaced by Gaius Octavius as the governor of Macedonia in 59 BC and would be later prosecuted by Caesar and Crassus for mismanagement. He was found guilty and exiled to the island of Cephellenia.

In this scenario, both armies form two groups with the Daci, as defender, placing their largest on the board first, followed by the Roman player placing both hist groups. The Bastarnae allies are now placed anywhere within the deployment area. Hybrida keeps close control over the reserve cavalry and are treated as an allied contingent for the scenario. – Wiki 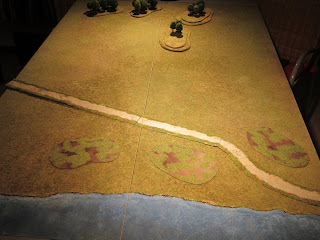