Composition of the Armies

To refight the four battles of the civil war, Compiègne, Cologne, Amblève and Vincy, we would use the Carolingian army list of III/28. There are a few minor wrinkles with this, firstly, the Frisians were allied with Neustria during the war and these are not listed, secondly, the nations mentioned on the Carolingian list (Swabia, Bavaria, Thuringia and Gascony) had yet to be subdued by Charles Martel, requiring a further two-decade long conflict in Germania (721 – 741). Without their participation, the ratio of cavalry to infantry could be lower than is listed.

Looking at the resources available for both armies, Austrasia encompasses the original tribal territories of the Salian and Ripuarian Franks, leaving the former Gallo-Roman territories, including Burgundy, under Neustrian control. Yet, despite each duchy covering large territories, both armies at the time could field relatively small forces. War in the Middle Ages cites the number of magnates supporting either side as small, with the non-participating viewing the conflict as a dispute between two houses; the Merovingian and Pippinid. This generated possible troop strength, Contamine observes, to reach about 1000 or 2000 men with 5,000 being an exception. This would eventually change during the reign of the Charlemagne, as military obligation in some form would become universal for all levels of society, including the Church.

A further point made by Contamine, Frankish cavalry were not averse to dismount and fight on foot when the need arose. This possibility is not catered for in DBA3, but is allowed in DBMM with knights fighting as spearmen.

Although not recognised, the Frisian are allied with Neustria and DBMM lists them as such and the end date of 690 extended to participate in the civil conflict. (See II/78, Old Saxon, Frisian, Bavarian, Thuringian and Early Anglo-Saxon Armies). This gives Radbod a massive warband host to meet Charles before the walls of Cologne and not a mirror image of the Carolingian army. More information can the found here.

Placing these points in proper perspective, a modified Carolingian list for the civil war of 714 – 719 may look like this. 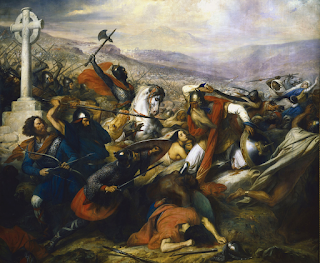