The Frankish civil war of 714 to 719 was a golden opportunity for Muslim forces to plunder lands south of the Garonne River. In 714, Muslim columns ravaged the last vestige of the kingdom of the Visigoths, Septimania, finally capturing its capital, Narbonne in 720. With Septimania in Muslim hands, Aquitania and Provence were now vulnerable. Hugh Kennedy, in his book “Muslim Spain and Portugal, A Political History of Al-Andalus” presents a well written account of the invasion, the collapse of the Visigothic kingdom, and the political obstacles affecting Muslim control of Iberia and the invasion of Francia. All exciting elements that beg their implementation into a campaign, below are a few significant details that might play a role its design.

The invasion of Hispania.

A force of 7,000 to 12,000 crossed the Straits of Gibraltar in April 711 and at its head, Tariq ibn Ziyad, Berber commander, met the Visigothic forces of King Roderick at a location southeast of Medina Sidonia. The Battle of Guadalete, as it came to be known, was a decisive defeat leaving much of the Visigothic leadership dead on the field including King Roderick. Their loss removed the possibility to raise a second army, leaving the defence of such towns as Cordova and Toledo, to their small garrisons. Lacking such means, other towns opened their gates on promises of generous terms of surrender. The duc of Murcia, Theodemir, eventually surrendered and given generous terms, retained his citadel and several settlements on the condition he not encourage others to resist Muslim forces and pay an annual tax.

The operation in Iberia was controlled from Qayrawan, the Umayyad capital of Ifriqiya, leaving much of the daily operation to the Arab commanders. To broaden and sustain the Muslim advance, the Umayyad governor, Musa ibn Nusayr al-Lakhmi joined the invasion with 5,000 Syrian troops, enabling the Arab and Berber forces to reach Galicia in the north and as far east as the Ebro River by 713. The regions of the Basque and Cantabria soon followed.

“Muslim Spain and Portugal” is one of the few books I have read that touch on the social divide between Berber and Arab peoples comprising the invading army. Most of the Arabs of the early invasion, apart from the Quarshis, belonged to the Yemeni group, well familiar with town and agrarian life. Their settlements preferred to be centered around garrison towns, such as Kufa, Basra or Qayrawan in Ifriqiya, however, implementing such settlements in al-Andalus was hard as Arab communities tended to be smaller and scattered throughout peninsula.

Since the Umayyad conquest of North Africa, Arabs were less inclined to integrate into Berber society, leaving the Berber to continue practising their pastoral way of life, even to bring their flocks with them to Hispania. Kennedy suggests this way of life may have played a role in the later land distribution, the Arabs receiving better land leaving the lesser quality to the Berber, despite being Muslim and contributing a large part to the conquest. The differences between the two peoples was not only seen in the distribution of land, but their taxation; Berbers were taxed disproportionally to their Arab brethren. This division would eventually play a factor fuelling rebellion in 741.

The House of War

Dr al-Harb or the “House of War” describes all non-Muslim territory as open to plunder and though land distribution fostered the expansion of settlements, plundering would bring wealth. Control of the Iberian Peninsula in such a brief period (3 – 4 years) left the only non-Muslim territory across the Pyrenees in Francia.

To this end, Al-Samh ibn Malik al-Khawlani invaded Septimania to defeat the last vestige of Visigothic resistance by capturing Narbonne in 720. Reinforced, Malik conquered what remained of Visigothic Septimania making Narbonne his capital. From Septimania, Arab columns would raid Provence with impunity and to the north, Aquitaine and Poitiers.

History would not record many raids and it was perhaps fortunate for the West, that old rivalries and jealousies undermined effective governance of al-Andalus and control of incursions into non-Muslim lands. During the period as mayor of the palace, Charles Martel (714 – 741) would see al-Andalus with seventeen governors. 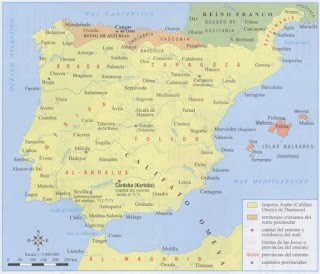