Mounted infantry was not a troop type that I was familiar with, despite my long experience with DBA. It was not until the refurbishment and subsequent regrouping the late medieval collection into armies that I discovered just how many armies listed them. Their only mention, in the rule book, comes at page 5 detailing the composition and base size; 3-4 foot plus a vehicle, led mount or mounted figure are placed on a 40mm x 40mm base for 15mm size figures.

Gleaning through the army lists, here is an overview of mounted infantry types. Note, these are all bow armed, fast or solid, infantry.

The following advantages-disadvantages come to mind and apologies if any have been missed.

Can be destroyed by any mounted in close combat with a better than score.

Base depth may pose a problem when recoiling.

In close combat with solid foot, bows will recoil on an even score.

Can make a second and subsequent move in good going.

Fast troop types recoil from solid on an even score.

If the above list of armies seems lean, the opposite is true if reading the DBMM army lists. I do not play DBMM, but do find the army list books a useful research tool. The revised edition was published two years after DBA3 and does benefit from the latest research or translations.

DBMM Book IV has been illuminating as the mounted infantry types are greatly expanded and the number of armies using them has increased; as an example, you will find more Mtd-4Cb, but also Mtd-4Bd, Mtd-Sp and Mtd-Ps. Plans are made to add these to the collection as there are a number of scenarios that would require them. And so, the hobby marches forward. 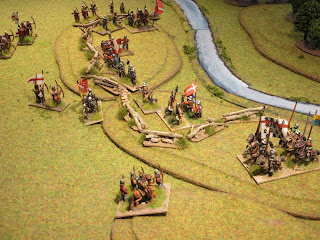