DBA24, a compromise between the standard DBA game and the big battle option, has been our preferred choice for the past two years. Increasing the number of elements to 24 has not only improved the look of the game, but forces can include reserves, simulate historical deployment and use seldom selected options without any substantial increase in game time. The recent number of late medieval historical scenarios posted here do make use of the double-sized command and the latest, Montlhéry (1465), is what prompted me to explore the use of a demoralisation rule.

Players familiar with DBA are aware that demoralisation of a command is a feature found only in the big battle option. Basically, demoralisation is reached when it suffers a certain level of losses precipitating the flight of elements to an army’s base edge. The rule is particularly useful if unwilling allies or treacherous nobles play a role in an army’s formation. For the scenario of Montlhéry, French and Burgundian forces were organised as the vanguard, main battle and rear guard, facilitating the use of a demoralisation rule for the 24-element game.

To determine the ‘demoralisation’ for each division, calculate this as a third of the division’s original elements, excluding horde and camp followers. Reaching demoralisation, flight would take place on the player’s next turn. Expending pips, a player can hold elements or groups in place with the process repeating each turn. Victory is reached when 8 elements are lost or (new) if two of the three divisions (vanguard, main battle or rear guard) are demoralised. (see page 13, paragraph 7).

Historically, the composition of individual divisions and their commanders would be made days prior to the actual battle. Based on historical examples from the late 15th century, an army’s vanguard should be strong enough to engage with the enemy, if required, while waiting for the arrival of the main body. Do note, this would differ greatly from the vanguard of an army on the march in friendly territory, whose primary task would involve logistical issues and the location of a camp.

Next, the largest division or ‘main battle’, led by the CinC, would contain the elite of the army and support troops taking its position in the centre if the army were formed into line. This may also contain the army’s reserve positioned behind the centre forming a second line.

The smallest of the three divisions, the rear guard, protected the baggage train while on the march, but on the day of battle, it could form an army’s reserve or protect the army’s flank. If the army formed a line, the rear guard was positioned on the left. 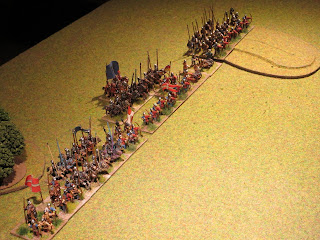 The French, vanguard, main and rear guard from lower left to centre of photo. 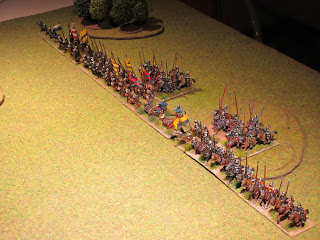