Just A Test – The Teutonic Order

I recently finished 10 elements of German infantry as these would be needed to develop a few scenarios from the Thirteen Years War, between the Teutonic Order and Poland. Flags will be painted soon, but as the Polish were complete, I decided to run a few test games with these two. The terrain of Northern Poland, where most of the battles took place, is relatively flat but dominated by woods and marsh.

Both forces adopted a horn formation with lighter cavalry positioned in advance of their heavier counterparts. Infantry of both sides were held in reserve; the Polish being centrally located while the Order formed two groups also centrally positioned. Although Poland was defending, they launched an aggressive assault on the Order’s left flank. The speed and effectiveness of the Polish and Lithuanian columns became critical forcing the reserve infantry to be ordered to restore the situation. The momentum created by the Poles was unrelenting and earned them a decisive victory, 9-2. 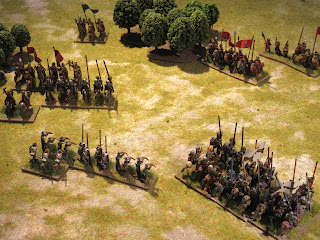 As defender, the Teutons changed their deployment placing equal number of infantry on both wings with a strong cavalry centre. With the light horse in support, German auxiliary troops secured both the wood on the left and the swamp on the right. Deployment of the Polish forces remained unchanged. Taking the offensive, the Teutons moved their infantry wings and centre in unison confident that any Polish threat to either flank would be kept in check. The expected breakthrough of the Polish centre however met stiff resistance sending Teutonic knights to fall back and regroup. The Polish light horse on the right, having remained idle for an hour, suddenly sprang into action to appear directly behind the Teuton centre. Caught off guard with enemy to rear and in front, a hail storm of bullets and crossbow bolts, the Teutons were hastened off the field serving the Polish another victory, 8-2. 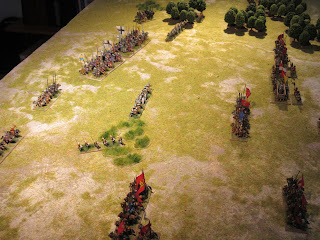 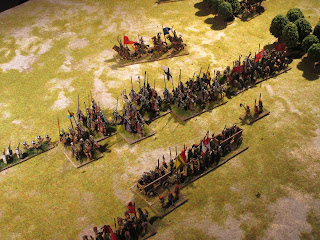 Again defending, the Teutonic Order deployed in deeper formations with both flanks protected by woods and marsh. The majority of the German infantry formed the left wing, the cavalry in centre leaving the right wing to be protected by a mix group of foot and mounted crossbow. The Polish deployed in their scorpion deployment with the Lithuanians forming the left horn and Polish the right. The town militia and wagons were held in reserve behind the centre.

A brisk skirmish on the Polish right announced the start of battle which quickly escalated to a general action as both sides committed more troops. Equal casualties were suffered by both that a brief respite was ordered to regroup. The battle now shifted to the centre as the Teutonic cavalry advanced on the Polish centre. Polish cavalry opened their line to allow the town militia and wagons to move through. This move halted the Teutonic advance as new orders were given to German crossbowmen to clear the way before resuming their attack. This delay was quickly snapped up as the Polish left wing resumed their attack catching the Teutons off balance. Adding to the Teutonic misery, fire from the town militia and wagons outmatched those created by Teuton crossbows. A harder fought battle but another Polish victory, 8-5. 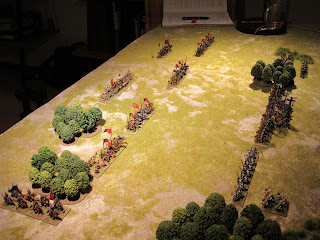 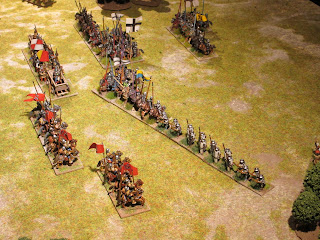 Game three developed into a better match as casualties were even for both sides after an hour of battle (four turns, 3-3). The Teutonic assault on the Polish centre lost momentum to the effective defense by the town militia and war wagons. Further practice is required and this will be done later this month.