The scenario, Battle of Castillon 1453, was drafted in December, but after the posting of Formigny 1450 last month, I decided to postpone this and present Gavere instead. This actually worked well as the last issue of Slingshot had an eight-page article by Nick Harbud covering Castillon complete with an analysis of troop strength, camp size and suggestions for play using four known rules sets, DBA3 however was not one of them. Hopefully, this will be shortly corrected. A quick summary of the battle of Castillon can be found here    (link).

To use DBA3 for the Battle of Castillon there are a number of issues that need addressing, such as the size of the French camp, the terrain, the composition of both armies, the deployment of the English army, close combat around fortifications, the arrival of the Breton contingent and lastly, the artillery.

Size of the French camp.

Depending on the source, the size of the camp varies between 700 yards x 300 yards to 500m x 200m; the larger size may be the actual perimeter which follows the hill’s irregular shape. From the photo, even the smaller size of 8BW x 3BW gives adequate room for deployment and this will be used for the tests.

Attention is given to one camp constructed south of the Lidoire, but if one considers the number of logs required to palisade the camp, these could equally have come from the right bank of the Lidoire, thus creating a secondary site for support troops. Sources do record people and animals seeking refuge across the Lidoire. 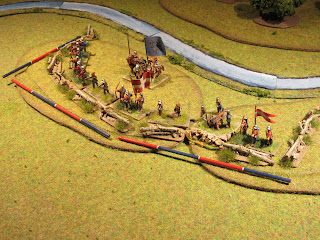 Size of the French forces.

Referencing the historical representation on page 14, the French Ordonnance (IV/82a) represents approximately 4050- 4800 troops, just short of the often quoted 7,000. The difference may well represent other bodies intended for siege work? Two horde (7Hd) would reach a total of 7000.

Size of the English forces.

The English list (IV/62d) represents 5750 – 6900 troops, however, not all were present at the opening of the battle as the Gascon contingent arrived after the battle had commenced.

Note: There is a French video of the battlefield showing the French position as seen from the English perspective. With a little imagination one could visualise the palisade, but troops behind them would be shielded from observation.

Shooting at or in close combat with defenders of a forts or city, these add a factor of +4 and camps a +2. The interior of a camp is considered good going, however the French position is atop a hill; its crest line should be defined as this will be crucial during the game. Palisades should reduce movement to 1BW when crossing. 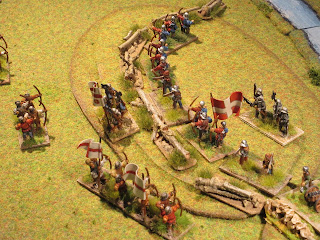 The rule suggestions mentioned in the Slingshot article called for a reduction of artillery shooting factors and the inclusion of distance shooting for culverines or handgunners (Ps in DBA3). If one considers the placement of artillery in a camp to be treated the same manner as a fort or city (CF 2), the reduction is accounted for.

The arrival of the Gascon contingent.

Following the action at the priory of St. Lorent on the morning of 17 July, Talbot rested his troops. Learning of the French retreat, Talbot approaches the French camp from the south. The English deploy 6BW from the French camp leaving the Gascon contingent start at the board edge.

The arrival of the Breton contingent.

Messengers would be dispatched to reach Montauban and the Breton cavalry at first sight of the English approach. A die cast or card draw to could be used for the arrival of the Breton contingent. 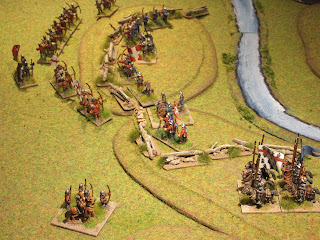