The Battle of Formigny in Normandy, took place on April 15, 1450 between the English and French-Breton forces. It ends with a decisive victory for France, thereby ending the ambitions of the English crown on Normandy.

Early 1450, English control of the Duchy of Normandy had receded to three areas; the northern tip of the Cherbourg peninsula, the region between Caen and Bayeux and the town of Avranches as the lands between were slowly being reclaimed by the French. A number of factors played a decisive part in the reconquest; the revitalisation of the army, a newly formed department for artillery and lastly the neutrality of Philip the Good, Duke of Burgundy, a former ally of England. Joining the French camp for the upcoming campaign was the Duke of Brittany, François I.

To avert a disaster in Normandy, the Duke of Somerset financed the gathering of 3,500 men to join the garrison at Caen.  Led by Sir Thomas Kyriell, they would assert English control of Normandy by re-capturing key castles and cities. Landing at Cherbourg on March 15, Kyriell, with the local English garrisons, marched south to lay siege to Valognes. Alerted to their presence, the King of France sent John II of Bourbon and 3,000 men to contest their movements. A Breton army of 4,000 men under the command of the Constable of Richemont would also support this endeavour. However, on reaching the frontier at Dol-de-Bretagne, the constable was ordered by Duke François I to leave half the army in Brittany as a precaution. With this completed, Richemont continued with his objective, to join John II of Bourbon.

With Valognes now in English hands, Kyriell marched east to reach Formigny on the afternoon of the 14th of April. On the morning of the 15th, the English were ready to resume their march when the French vanguard was sighted coming from the west. Following the standard practice, the English formed in line astride the road to Bayeux, with archers in front supported by the men-at-arms. The English force was divided in two divisions, the left, under the command of Sir Mathieu Gough and the right, commanded by Kyriell. All troops were dismounted with the exception of a small cavalry force positioned on the other bank.

The ground in front of the English position is relatively flat but dotted with fields, orchards and farm houses. The river Ruisseau is behind the English line and the hills beyond form a ridge line parallel to the river to reach the Carentan - Bayeux road. The village of Formigny played no part battle and need not be placed if using a smaller game board. 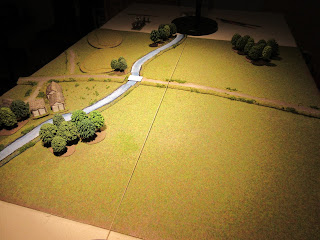 Deployment: English forces are divided in two equal wings, Kyriell commanding the right and Gough the left. The single element of cavalry is part of Gough’s division and positioned on the opposite bank in support. The English camp or ‘Taudis’ anglaise is located to the right of Kyriell’s line.

Following the English deployment, the French player positions his troops (nine elements) 6BW from their line. The Breton contingent enter south of the Ruisseau on the turn following the French cannonade and are placed 6BW from Gough’s division.

Temporary fortifications (optional). On the English first bound only, pot holes and improvised stakes are placed in front of each element of longbowmen. This represents the completion of defensive measures begun on seeing the French vanguard. The element remains stationery and card stock representing pot holes and stakes (1BW x 1/2 BW) are placed in contact with its front edge. Treat them as rough going reducing movement to 1BW for mounted and solid formation troops.