The final batch of Landsknecht have been varnished and tomorrow they will be fixed to their bases. Completing them was an arduous task but between painting sessions, I had time to contemplate further the idea of a campaign.  This would-be put-on hold and in its place will come a series of historical scenarios, similar to ones made for the dark age period. I thoroughly enjoyed the time spent researching the latter half of the 15th century and found many interesting battles that begged to be fought out on the game board.

From my last post I demonstrated how the collection could be stretched to cover many other nations than what I had originally painted. From the photo you will see production is already underway and more are planned in the coming weeks. These will cover the lesser-known conflicts, such as Portugal’s bid for independence from Spain, the final battles of Teutonic Order with Poland and the rebellion in Flanders and Liége against Burgundian hegemony. Conflicts within the Holy Roman Empire are also on the board. 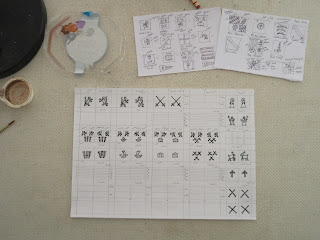 Have a happy holiday season.