Normandy 1450 - the raid, the ambush and battle

With the exception of the Social Wars of Rome, peasant rebellions receive little attention by ancient and medieval rule sets. Reading the events preceding the Battle of Formigny fuelled the recreation of several light-hearted contests to the table between an English foraging party and the local peasantry. The smallest command possible in BBDBA is six elements, therefore the English foragers would consist of a mix of mounted and foot troops. The French resistance, I adapted the Lurker rule in HOTT for the first two sets with a third meeting, as open battle.

English scouts galloped past the village intent on herding the grazing livestock north of it while mounted archers sealed the southern approach to the village. Following behind, English infantry marched directly on the village. The sudden appearance sent the few remaining villagers sprinting toward the woods. English revelry came to a halt when armed peasants catching the archers as they were dismounting. Peasants armed with bow moved out of the wood, but their arrows proved ineffective. Unbothered by the loss of the mounted archers, the raid was quickly executed leaving the peasantry powerless to contest it as they dared not move into range of English bows. 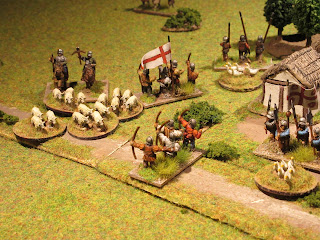 Elsewhere in Normandy, English scouts and mounted archers formed a vanguard of a supply convoy as news circulated of armed bands of peasantry were about. The column reached a section of the road flanked on either side with hedge lined fields and woods. The first sound of alarm came when the vanguard came under attack. Thick hedges blocked visibility and alarm further heightened with the sound of battle at the tail of the column. The action did not last long and the few English survivors fled leaving all their gathered plunder behind. 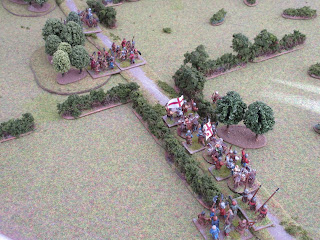 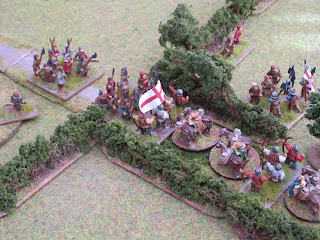 A few peasant bands, led by firebrands, were bold enough to meet small parties of English inviting them to open battle. One such act of lunacy deployed a low ridge flanked by woods. Eager to repay the compliment, the English moved into line. Arrows rained on the peasant bands but their line did not waver prompting to English line to move forward. English scouts had encircled the enemy position to help the billmen cut through the peasants. With little understanding of tactics, peasants hurled themselves at the English archers forcing uncommitted English to join the hand-to-hand battle. This mis-calculation  cost the English dearly as half their number became casualties sending the survivors scurrying off the field. 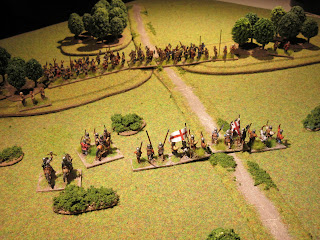 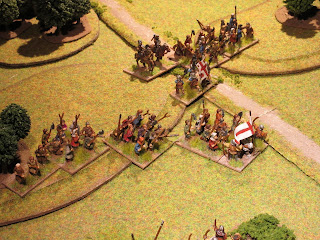 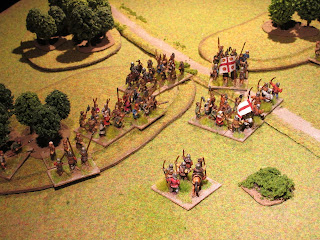