A prequel to Formigny – and a bit of fun

Much of the research done for historical late medieval scenarios will not find its way to the blog, as there is simply too much. That said, I do find the following events preceding the Battle of Formigny interesting enough to do a write up and have some fun on the game board.

Since the Agincourt campaign, the Duchy of Normandy has been remained occupied by English forces. From its regional headquarters in Caen, other key towns and cities, such as Cherbourg, Rouen, Bayeux, and Avranches also contain English garrisons and smaller units dispersed among the castles and villages in the region.

To further strengthen control over Normandy, measures were taken to have urban inhabitants wear the cross of St. George. This not only served as a sign of their submission but would easily identify visitors. Unlike English occupied Guyenne in the south of France, the subsistence of English troops led them to forage and pillage the Norman countryside with severe consequences for the local inhabitants.

The situation became so rampant (1440-1450) that English parties would encounter resistance by the local peasantry and Wright mentions in his book small numbers of French knights aiding the peasant bands. The escalation of resistance in Normandy did not go unnoticed by Charles VII, King of France who according to Contamine, began a programme of subsidising the partisans of Normandy during the period of 1447-1450. Slowly, the situation began to turn as every forage party became a target as well as the convoys supplying the garrisons. As a result, castles and towns were eventually retaken with French military support, such as Valognes and Carentan on the Cherbourg peninsula, Saint Lo, Coutances and Granville in the west and Argentan, Pont L’Evêque and Pont Audemer in the east.

In late 1449, the Duke of Somerset financed the assembly of a contingent to depart England and join the garrison at Caen. The next step is translating the resistance movement preceding Formigny to the game board. 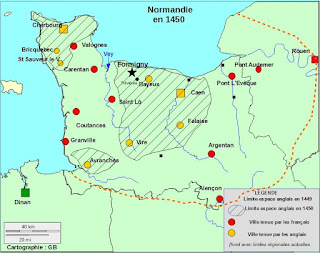 Preceding Formigny, the raid, the ambush and the battle.

Knights and Peasants, The Hundred Years War in the French Countryside’ by N. Wright

‘War in the Middle Ages’ by Philippe Contamine