While searching for information on the conflict between these two one question did come to mind, when did Sogdia become independent from the Hunnic group known as the Chionites (Xiaona)? These are not listed as enemies of the Central Asian City States, despite history informing us of the defeat of the Chionites by the Sassanid, yet they do not disappear from record, but are reconstituted in other parts of the region lasting until the 8th century AD.

In our recreation of history, the first battle is typical of the Hunnic incursions into the Central Asian region. The subsequent battles simulate a reconstituted Chionite (II/80c) against the Sogdian confederation. Both will use the maximum number of cavalry allowable Terrain for all three games is steppe, placing the confrontation near the fertile region north of the Jaxartes River.

Game one
Sogdia, the aggressor has pinned a marauding Hunnic band with their backs to a tributary of the Jaxartes River. Further, the undulating plain and scrub offer little obstacle for the Sogdians as they formed an extended line for battle. The Huns, feeling the constraint offered by the ground launch a desperate attack with their horse archers on their left while occupying the attention of the Sogdian elsewhere. The shaman’s offering before battle worked its wonder as the Sogdian right flank collapsed under the spirited attack by Hunnic horse archers sending the Sogdians in flight. Score, the Huns 4 – 1. 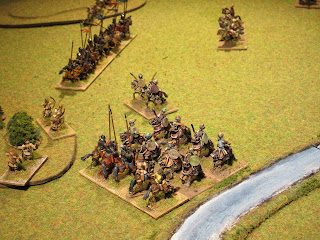 Game two
The Chionites find the Sogdian army resting its left protected by the river and cavalry positioned centre. Archers formed up on both flanks. The Chionite warlord deployed his archers in centre ordering them to advance while horse archers kept pace on either flank. The tempo gave the Chionite left wing ample time to clear the scrub of Sogdian archers and responding to that threat to the Sogdian commander sent cavalry to their aid. The situation escalated as both sides fed more troops to the stricken flank. The outcome was to the detriment of the Sogdians as their entire right wing collapsed sending the rest to retreat. Score Chionites 5 – 2. 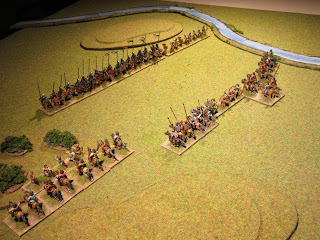 Game three
The Sogdian are caught on an open plain and therefore formed their archers in centre with cavalry evenly deployed on both flanks. 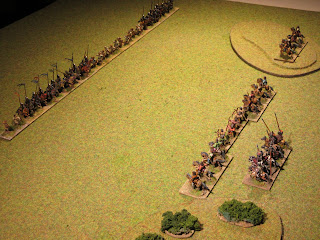 A lone hill on the Sogdian left became the scene of a hotly contested battle between Sogdian cavalry and Chionite horse archers. Dispensing with distance shooting, the Sogdian archers joined the fight on the hill.

The swiftness of the assault on the hill caught the Chionite warlord off guard and coupled with subsequent losses elsewhere could not send assistance to the battle on the hill. The Chionites left the field to the Sogdian. Score Sogdia 4 – 2. 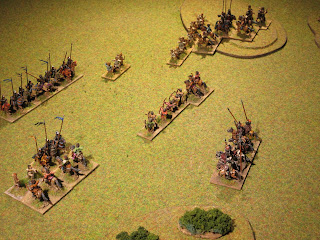