On the heels of a few standard size games the next few will return to the enlarged command; double size command, but using one die for pip score.

Game one
The Byzantine deployed its infantry in centre with cavalry on either flank, while skirmishers secured the rough ground protecting both flanks. The Sassanid positioned its main cavalry force in centre with the levy and elephants posted to both flanks. More cavalry formed a second line supporting each wing and centre. Adjusting their line of approach, the Sassanid right wing struck first gaining an initial advantage which the Byzantine could not overcome resulting in the loss of the entire left flank. Despite valiant attempts elsewhere Byzantine resistance crumbled to give Sassan an 8 - 5+2xHd victory. 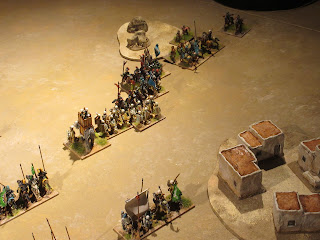 Game two
Facing the Sassanid on similar ground, the Byzantine revised their deployment positioning the infantry on both flanks with a strong cavalry centre. The Sassanid deployment remained unchanged but due to the restrictive nature of the ground, the divisions were grouped closer together. The wind played havoc for the Byzantine (low pip scores) as signals were routinely misunderstood. Initiating their attack with their right wing, the Byzantine lost their momentum on which the Sassanid seized the advantage. Caught in mid-stride, the Byzantine were dealt a severe blow (6 – 1). For the next hour, the Byzantine tenaciously held their ground to swing the casualty count to even the score  at  7 – 7. Personally leading the reserve cavalry, the Sassanid general tipped the scales to snatch victory iver tge Byzantines, score 9 – 7 for the Sassanid. 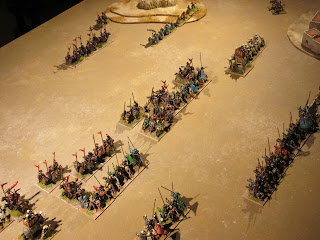 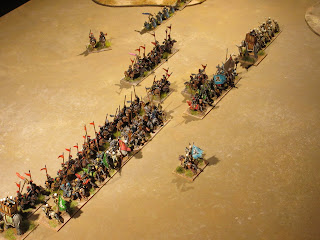 Game three
With their right wing resting on a deserted village, the Byzantine deployed in their standard formation with adequate spacing between divisions. Similary, the Sassanid right made use of the cover provided by the difficult hills. All the asavaran and Immortals formed two lines in centre with all the horse archers taking a position on the left. 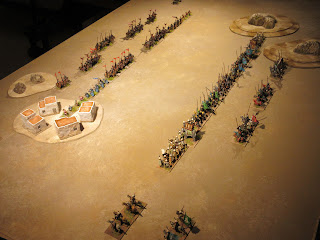 Holding their right in position, the Byzantine psiloi advanced to seize the first of two hills with the heavy infantry following close behind. Byzantine cavalry shifted their position to better support this operation. The Sassanid were not idle and moved their own left wing leaving the asavaran cavalry to strike the Byzantine first. 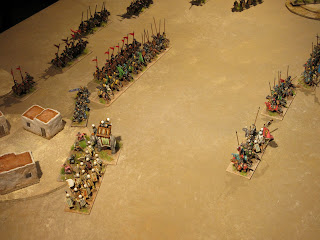 Taking heavy casualties (2 – 0), the Byzantine recovered by sending the heavy infantry to support. In the village, the psiloi frustrated the Sassanid elephants.  through the village on a merry chase. After a period of inconclusive fighting both sides committed their immediate reserve formations. In that time, the elephant threat was eutralised bring the score nearly even (5 - 6). 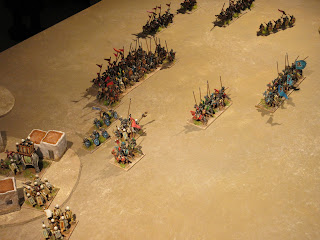 The conflict reached a highwater mark as the Strategos shifted his attention to the left flank and moved his cavalry reserves to charge the Sassanid supporting units led by their commander. 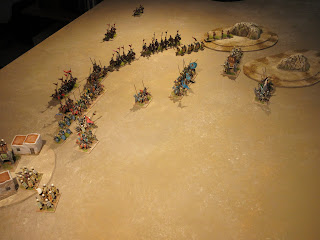 On the Byzantine left, working in unison, the psiloi distracted the levy while the heavy infantry attacked the elephant corps and second body of levies. This opened an avenue for the Byzantine cavalry to move through and strike the asavaran. 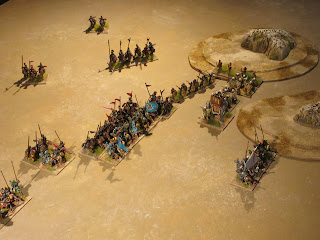 Eliminating the levy, the psiloi now skirmished with the asavaran reserves while awaiting the arrival of the heavy infantry to join the.m. The amount of pressure brought on by the Byzantines was too much for the Sassanid to counter giving the Sassanid commander no choice but to signal a retreat. Score 9 – 6 for Byzantine. 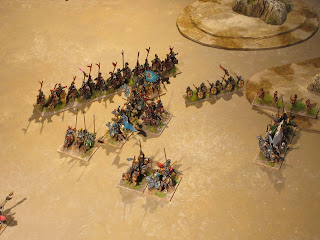 Some thoughts,
The Byzanitine were plagued with low pip scores in games one and two, which made game two a miracle for the Byzantine; bringing the score from a 6 – 1 deficit to an even 7 – 7.

Game three required a different strategy and after reviewing "Belisarius" by Ian Hughes, I decided to develop a “Dara” gambit. This worked, as the loss to two Byzantine cavalry on the right flank lured the Sassanid to feed further their initial success. Once the Sassanid effort reached its high watermark, the battle shifted to the other flank catching the Sassanid off balance to end the battle with a score of 9 - 7. 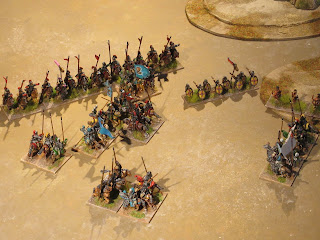