540 AD
Following their victory over Childebert at Bayeux, the Breton army returned to Armorica where they remained for the rest of this period. More families migrated to the Saxon and Frisian settlements giving both Childebert and Chlothar pause to negotiate treaties with their respective intruders.

542 AD
Content that the migration issue would remain quiet, both Childebert and Chlothar make plans to retake the lands of Aquitaine lost to the Visigoths in recent campaigns. Later that year, heading the appeals from the Thuringian nobles Theudebert leads an army to confront the Bavarian invasion.

543 AD
Encountering an Ostrogothic revival in Italy, the Byzantines request the support of their ‘allies’, the Franks to deal with them. In reply, Theudebert would send troops as quickly as the current internal and external conflicts could be resolved and so Belisarius made plans to campaign in the following year.

During the summer, the combined forces of Childebert and Chlothar meet the Visigoths south of Orleans. Fought near the Loire River, the Neustrian army is defeated by the Visigoths forcing both Frankish kings to retreat to their respective domains.

Across the Rhine, Theudebert with Thuringian allies engage the Bavarians near Giessen and soundly defeat them killing their king. The realm of Thuringia now becomes part of the kingdom of Austrasia which should deter any further threats by the Bavarians.

544 AD
The defeat in Aquitaine coupled with the Breton, Saxon and Frisian incursions has spurred a wave of discontent among the nobles of Neustria tantamount to open rebellion. Not only has the commercial trade been disrupted by piracy but the rising cost to support the ineffectual wars is proving a tipping point for the disaffected nobles; the situation is quite similar in the fiefdom of Chlothar. The situation leads both sides to raise armies and these met to do battle a day’s march from Paris. The defeat of the royal army sent Childebert to seek the safety behind the walls of Paris with the rebels in pursuit. Heartened by the news of Childebert’s defeat, the nobles of Reims rise in revolt against Chlothar.

Those armies met in August and rebel forces defeated Chlothar near the River Aisne. Leaving his troops to their fate, Chlothar fled to his capital at Reims and sent messengers to his nephew, Theudebert, for help.

545 AD
Rebel forces besieging both Paris and Reims disperse before the winter snows and vow to return next spring to resume their fight. Theudebert used the winter period as to how best to aide his treacherous uncles news arrived of Childebert’s death (assassination?). Aware that Childebert had no heir to succeed him, Theudebert moved quickly to Paris to set himself as regent until the question of a successor could be resolved. Chlothar was in no position to contest this decision as he would not stir far from Reims with hostile nobles moving about the land.

548 AD
Three summers have passed and the diplomatic skills of Theudebert have gain fruition arranging the union of his son and heir to Chrodoberge, the eldest daughter of Childebert; a union that would expand the Austrasian realm already increased by the recent acquisition of Thuringian lands. Burgundy was now a staunch ally, however, regaining Aquitaine would require some thought as the Visigoths were led by capable generals and have not been defeated in open battle.

As the calendar approaches the next decade (turn 5) good news appeared on the horizon as the majority of Saxon and Frisian activity now moved across the channel finding Britannia a richer prize. 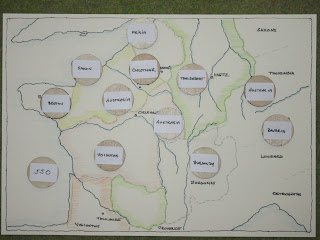 Important Battles:
Posted by Timurilank at 00:05